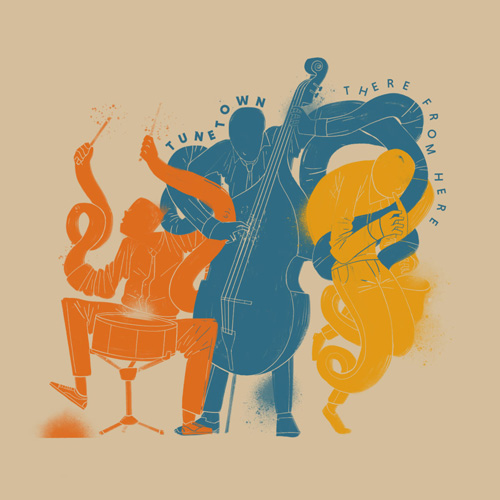 The lively arts community in and around Toronto boasts some of the most fascinating musical minds in TuneTown, and these three musicians – drummer Ernesto Cervini, bassist Artie Roth and saxophonist Kelly Jefferson – are among the most fascinating to listen to. Their exploits have been documented in their first album, There from Here, an enigmatic title for a recording, for sure, but decoded in this tantalising and adventurous trio music. The repertoire is born of an eclectic tonal palette that embraces three musical personalities, fusing them into music with a singularly fascinating personality. The instrumental voices of these three musicians makes for an interplay between them that is profound, witty and joyous and produces music that appears not just improvised, but spontaneously composed as it sends the music scampering through breathtaking contrasts made lyrical and evocative through the fullest exploration of the individual character of their instruments.

The whole recital is a fascinating excursion in search of a sonic world seemingly without ever needing the chordal capabilities of the piano. Remarkably this sojourn extends ten pieces during which time you do not ever miss the harmonic universe of the piano. I suspect that part – if not all – the entire reason for that is the manner in which Mr Roth plays his gorgeous-sounding contrabass. It’s a deep, booming sound that seems to echo from the deep, woody belly of the instrument.

Mr Roth’s pizzicato is sharp and ink-dark and he often uses the strings to strum several notes at once. He also displays a natural feeling for all of the music and his resonant tone is enhanced by the most subtle control of light and shade. This, of course, even as he displays extraordinary gift for playing con arco and while stabs at the strings to show what a great time-player he is simply by staying in touch with the heartbeat of the music.

All of this leaves the saxophonist, Mr Jefferson and drummer Mr Cervini to dig and delve, and mine the melodic landscape of this music to reveal the precious metal that it ultimately reveals. This relationship (between the musicians) is instantly recognisable right out of the gates on “A Sonic Handshake” where the musicians introduce themselves to us (the listeners) as they introduce themselves to each other.

We are then introduced to the musical outcome of this meeting, which, of course, produces repertoire of a three-in-one design that is wholly satisfying and complete structurally and expressively – one which has been chiselled from melody and rhythm, held together by a ghostly harmonic fabric that is evoked rather than obviously stated in music to die for.

Laila Biali: Out of Dust