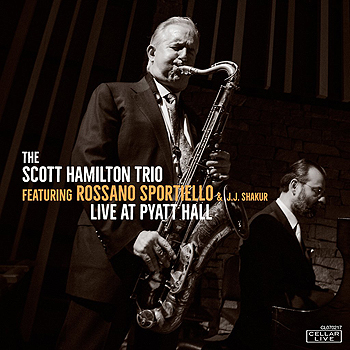 It seems that even if you wonder how many more times a Jazz standard might be recorded – much less ten of them – you can forgive almost anything that tenor saxophonist Scott Hamilton chooses to do. In the case of this disc Live at Pyatt Hall absolution for Mr. Hamilton is quite the moot point. The disc features beautifully-crafted arrangements of beguiling variety and sensuousness, in every lovingly caressed phrase – not only the luscious ones played by Mr. Hamilton, but also by pianist Rossano Sportiello and the incredible Hassan “JJ” Shakur. And also more importantly, mindful of the exquisite, “singing” quality of Mr. Hamilton’s aria-like tenor style, this is a not-so-oblique homage to every great singer that ever lived and whose lips most certainly kissed the breathtaking lyrics of each of these eternal torch songs.

Every piece here is played with a kind of languid ease; each melodic variation following the other, in a seemingly unstoppable flow, Mr. Hamilton’s sumptuous tenor sound is brilliantly caught in this live recording. As always there is an unhurried quality to his approach; each note is caressed as if it is the very living breath of the music, informing his phrase making with a lived-in character born of the well-honed values of experience in the neo-mainstream. Pianist Rossano Sportiello “sings” his way through the music too and plays his boppish clusters with forthright authority on such marvels as “You Do Something to Me”. Mr. Shakur, for his part oozes charm and brilliance throughout as he sculpts the long, seemingly interminable sustained inventions of “Black Orpheus” with a jeweller’s touch.

But listening to the manner in which Mr. Hamilton glides his way through the magical glissandi that seem second nature to him also as he bends choice notes articulating some with splashes of occasional colour – “Just As Though You Were Here” is a fine example – it’s clear that there’s not a semiquaver that hasn’t been fastidiously considered. And if his mellifluous timbre also beckons it is because Mr. Hamilton has that mythical Pied-Piper of Hamelin in every spacious – yet swinging – turn of phrase. Quite simply, this is music of the highest order, unmatched in every evocative freezing night and rainy day that it conjures as its music takes us into some seemingly forbidden place with trusted and inspiring musical friends.