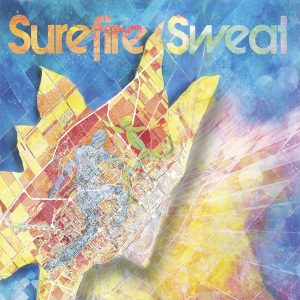 This eponymously entitled debut recording by Surefire Sweat cleverly mixes different contemporary styles of popular music including Black American and Afro-Cuban and other Caribbean forms into an interconnected rhythmic network that collides at the junction of the drum chair. Other instruments, of course, follow suit smartly forming – by turns – a brazen Second Line with musicians also jumping in to form an energetic, chanting choral backing group. Every once and a while, though, an instrument – the guitar of Peter MacDougall on “Sunshine Interference” for example – steps into the limelight, with an offering of a funky solo that collides with threads of an African hi-life rhythm.

This occasional soloing is also glued together by the funky horns of the burgeoning brass, reeds and woodwind section. Together with the rumble of bass, drums and percussion musicians take turns forming the bedrock of the band as each in turn steps forward to solo while the rest of the ensemble forms a rock-steady wall of sound that makes for an ever-changing canvas of tone and colour. “Rh Factor” appears to dissect the genetics of music and bassist Liam Smith’s rolling solo has a rippling Jazz groove the other members of the band follow, propelled by the drummer that gently create music with a cinematic that eventually launches into a broodingly percussive groove before a loose and funky close.

There is a fine sense of performance in both solo as well as ensemble. The wonderful sense of balance and integration of melody, harmony and rhythm, of composition and improvisation, of exploration – albeit brief – individuality and tradition is refreshing and impressively maintained throughout. Clearly Surefire Sweat has an acute sense of where they stand in musical history, which enables them to make interesting references to traditional forms while continuously innovating melodically and harmonically around the sparkling and venerable rhythms that inform their eloquent music. All of this bodes extremely well for a bright future in music.