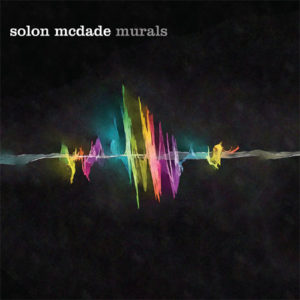 The “Murals” title of this enterprising disc from Solon McDade was, it seems, suggested by the line and seemingly visual flow of the music’s sinuous counterpoint – from the brilliant fusion of forms (and sometimes even breathtakingly formless writing) to the subtle micropolyphony of the nine works of this album. Some of the music – displayed here like proverbial pictures at an exhibition – echoes urban and suburban metaphors, while others are dreamy portraits and elegies; still others seem too drift outdoors into pastoral venues, but all are connected by the vividness of depiction and even when colour seems faded and sepia-like it is only to suggest that much time has passed and an old memory is being conjured up again because it is an irresistible one. One is, of course, speaking of “The Ballad of Sir William Ormerod”, in that last instance.

This music here – especially “Off the bed, Rose” and “Blues for Sebastian” for instance – is permeated with the type of polyrhythms that were once the abiding preoccupations of Charles Mingus and Dannie Richmond in the heyday of the mighty composer and bassist’s mid- and late-1950s ensemble. It also runs the gamut of the various characters to which Mr Mingus habitually gave voice, such as pianist Jaki Byard and saxophonist like Booker Ervin and John Handy among others. In the latter, from the central movement’s out-of-phase pizzicato repeated notes that sound like an instrument working overtime, to the long, accents of the blue notes of the solo that follows, the song folds in fluid, dissolving textures of its outer movements.

The rest of the musicians respond magnificently to the many facets of leader and bassist Mr McDade and their performance can fully stand in comparison to many of the foremost, similarly configured ensembles at anytime, anywhere in the world. In fact, in the superb “Ali’s Second Line” where the band takes a de rigueur trip down to New Orleans, where Mr McDade eggs the other protagonists on with flickering pizzicato to produce perhaps the group’s most energetic track on the album. In Mr McDade we have a bassist whose lustrous tone is melded with the kind of deliciously rumbling gravitas that makes it and his music highly seductive and memorable.