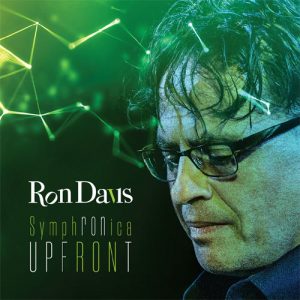 What do you call a little ensemble with a big sound? If the answer leaves you stumped, it’s because there is no word for it. Unless, of course, the leader is Ron Davis; in which case the name would be “SymphRONica”. It is not obvious, of course; rather it must be so because Mr Davis has a unique vision of the ensemble’s sound – a fluid-sounding hybrid between a symphony and a modern combo or contemporary ensemble. Even if that were the case when Mr Davis gets to work on its sound, the SymphRONica sounds like nothing else you may have heard before (except, perhaps, one from a long time ago that was headed by Max Roach and called, simply, The Max Roach Double Quartet, which comprised Mr Roach’s quartet of the day plus a chamber string quartet).

Even taking that quartet into consideration, the sound of Ron Davis’ SymphRONica is altogether unique and this has to do with the leader’s predilection for (often) baroque and Romantic music which he infuses into a liquid contemporary music burbling with a myriad of styles that traverse the cultural topography of the world rising from Brasil and never really setting until it circumnavigates the globe before coming right back through Europe to North America. But to describe it as such gives the impression of overcooking when the whole project is a masterpiece of subtlety.

Mr Davis’ take on the lineage of cool contemporary music is less than conventional on Upfront which, ironically, is his least upfront mash-up of the styles that he so elegantly melds for it not only mixes styles but also heads off into a countryside of gypsies, dancehalls as well as noble academies. Along the way we become part of a string quartet often in contrapuntal conversation with a swinging jazzy combo, all of which is the natural landscape onto which Mr Davis paints his masterpieces – his eloquent pianism urging other members of his ensemble to follow him as the music floats benignly over the sound of the string-laden ensemble that in turn adds a rich and not entirely predictable foundation to the music.

The surprises, when they come – especially on “Drew Bourrée”, “Sashagraha” and “Les Angéliques” – are effective but discreet: a baroque riff, played as pizzicato harmonics, a delicate curlicue of a bass line underpins what sounds – at the hands of wailing violins – a Gaelic lament, and a close-knit ensemble passage may develop suddenly from a single phrase played either on the piano, the guitar or the bass. Jazz, folk and classical traditions can seldom have come together as gloriously as they have on Upfront by the Ron Davis SymphRONica.