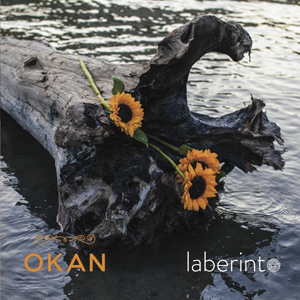 The new duo OKAN comprises percussionist Magdelys Savigne and violinist Elizabeth Rodríguez who are both young Cuban musicians now living and working in Canada. Both earned a reputation for themselves when they were members of Jane Bunnett’s seminal (and now iconic) all-women ensemble, Maqueque. The musicians have taken their first steps as a duo in an attempt to establish themselves outside the unique soundscape of Maqueque and there is evidence to show that they may, indeed be well on their way to doing so with OKAN, a word that we are told refers to “heart and soul” in the Afro-Cuban religious practice of Santeria. Laberinto is their first outing on their own and appears as an EP (you will get an extra track “Luz”, which is not available on the disc, but as a digital bonus from the girls’ Bandcamp page).

The music – all original, except for “Laberinto”, a bolero by the legendary Cuban songwriter, guitarist and singer Miguel Matamoros, which begins as such but soon motors into a rippling percussive groove that mixes a myriad of musical metaphors and soars from its minor mode into a viscerally energetic piece to immediately showcase the individual gifts of the duo; not that they are alone – the soaring melody is, after, announced by pianist and full-time Maqueque member, the prodigious Dánae Olano.

Miss Rodríguez is a wonderful vocalist. Her instrument is pristine and luminous and she makes great use of it throughout this short expedition, although (to my mind) she pays much too little attention to the violin, on which she can produce virtuoso performances at the drop of the proverbial hat and we have to wait until “Quick Stop”, at the very end of the disc for that. Still it is worth the wait, of course as she bows and plucks with clear virtuosity. Miss Savigne is a percussion colourist of the first order and her sinuous work on congas is a case in point. She swings with great authority on “1000 Palabras”, which also features Miss Rodríguez on violin and the inimitable Pablosky Rosales on tres.

The recording – produced by Toronto’s contrabass maestro Roberto Riverón – also features an all-star cast including Bill King (“Desnudando El Alma”) and Jeremy Ledbetter (“Last Day”) on piano, Alexis Baró on trumpet (“1000 Palabras”) as well as Reimundo Sosa on quinto (“Laberinto”) and Anthony Szczachor on drums (“Laberinto”, “Desnudando El Alma” and “1000 Palabras”). All of which makes this a disc that certainly bodes well for the future of OKAN.