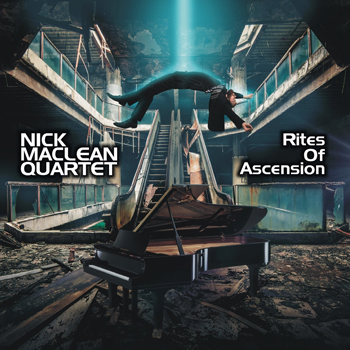 Much has been said about Rites of Ascension by the Nick MacLean Quartet being a homage to the music of Herbie Hancock, and that too, his music from a specific period in his long and celebrated musical sojourn. The booklet notes mention this frequently. And there are four charts on the album by Herbie Hancock. But it is these very charts that will show the listener that while Nick MacLean may have set out to make this a homage to Mr. Hancock, he has, in fact also paid his proverbial, obligatory dues to the venerable pianist, he is ready – and has – moved on very quickly into a musical territory that has rightfully claimed as his own.

For truth be told, in his masterful re-harmonisations of Mr. Hancock’s melodies, Nick MacLean has put his own fresh musical stamp. This he has done not simply by shifting the odd interval half a measure higher here or there. He has sculpted all of them into his own image and likeness, so to speak a chorus, or sometimes even just a few bars in to each song. Moreover, there are six Nick Maclean compositions (and one by trumpeter Brownman Ali), and each speaks to what listeners will soon discover: that Mr. Maclean worships at the altar of originality. And while a trill or triplet here and an glittering arpeggio there may conjure shade of Herbie Hancock, the music is remarkably fresh and original.

Rites of Ascension then is a sort of coming of age album for Nick Maclean and the most remarkable aspect of this is while most rites of passage for many young musicians can sometimes be long and arduous, for Mr. Maclean it seems to have all come together on his very first album itself. His writing is idiomatic and his playing reflects wonderful use of musical metaphor. His right hand caresses the keys with bright articulation and often dazzles with fluid runs and vaunted arpeggios. And he uses his left hand to ply unusual chord combinations and always seems to spur his right hand to maintain a dynamic momentum. It goes without saying that his music is extremely songful in the first instance.

“Goldberg Machine and “Elasticity of Time and Space” are two of the highest “highs” on this record. Each melody is so lyrical that often during the choruses one feels as if there is a spectral voice somewhere, “singing out the melody”. This is Mr. Maclean’s music, evocative of the poetry of feeling. It is also a great fortune to have fellow rhythmists in bassist Jesse Dietschi and drummer Tyler Goertzen along for the ride. And what a thrill it appears to be to have Brownman Ali to be the other lead voice on this recording. The trumpeter’s burnished notes – even those articulated using a wah-wah pedal effect – make for gleaming phrases and his solo on his original, “Madness of Nero” is utterly memorable.

The strategically placed recorded voices of Herbie Hancock (on “Cantaloupe Island”), the celebrated physicist Neil deGrasse Tyson (on “Elasticity of Time and Space”) and noted iconic essayist Christopher Hitchens (on Brownman Ali’s “Madness of Nero”) suggest that this music does more than just swing delightfully, but also seeks to reflect on more profound aspects of human existence. This together with the fact that you will be hard-pressed to find another production this good makes Rites of Ascension quite as unforgettable.