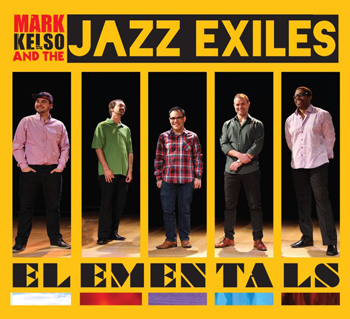 Listening to Mark Kelso and the Jazz Exiles’ music on Elementals the feeling of exhilaration is palpable. The skin feels as taut as Mr Kelso’s drums and there are nervous pulses of energy that cause goosebumps. When a reaction as visceral as this to any art – in this instance it’s music we are experiencing – takes place, it is a sign that we are both beholden to art (music) as human beings as no matter at what level of technical understanding we approach and/or appreciate the art in question (again, music). Secondly – and this has a direct bearing on the music of Mark Kelso as a musician and drummer – we discover that Mr Kelso has been blessed with a very special talent and that he has a very high degree of it in his system. Again, in the case of Mark Kelso it is a particularly highly developed rhythmic sense. He didn’t ‘learn’ it, but in all likelihood it’s in his genetic make-up.

And then there is this: Mark Kelso is of Irish extraction where ‘shape-shifting’ is believed to be also part of human physiology. In Irish we believe this has accounted for terrifying enemies and routing them in war. In Mark Kelso’s case, it enables him to literally become any kind of musician: an Irish folk musician, a Latin-American musician, a Jazz musician and a free improvising musician. This is no fanciful suggestion. Listening to Mark Kelso with the Hilario Durán Trio, for instance, if you had your eyes closed it would be impossible to tell if the drummer was or was not a Latin soul. Watching Mr Kelso play with Larnell Lewis at the recently concluded TU Jazz Festival 2017; again with eyes closed it would seem that Mr Kelso became an African-American drummer and then again an Irish, bodhrán drummer. It’s eerie…

Elementals then becomes a very eerily appropriate (if you will) title for this sophomore by Mark Kelso and the Jazz Exiles. It’s not only what we hear in more obviously entitled pieces such as “Elementals (Water)” and “Elementals (Fire)” which are turbulently indigo and call to mind ‘the sea tumbling in harness’, to quote the great poet and Welshman Dylan Thomas, while wondering aloud if it’s not a Celt ‘thing’ – this ‘shape-shifting’. Also like-minded are Mr Kelso’s other songs such as “Solace” and certainly “Time Piece” and “The Antrim Shuffle” (with its angular rhythms that come across as shards of broken beats), as well as “Boom Tune” and “Trance” (an obvious choice for the crowning glory of the whole album as it seems to encapsulate the whole business of ‘shape-shifting’ in a most mesmeric manner.

Mark Kelso shows that he is capable of writing music that comes not only from an intellectual pursuit but also infusing this with deeply felt emotions and on Elementals he has shown this other dimension to his writing with “Connor’s Crusade” (dedicated to his young son) and “Little Princess Aoife” (a portrait of his daughter – a child who is, we can glean from the kinaesthetic energy of the song, not only self-aware but ‘full of beans’). And yet, to make all of this come to life, it’s clear that Mark Kelso could not have done it without his fellow Exiles: the incomparable Rich Brown on bass guitar, Jeremy Ledbetter a musical maestro who just happens to play piano.

The same can be said of Luis Deniz, who – like Mr Ledbetter – is a master who just happens to be a saxophonist and likewise the young guitarist, Joey Martel (with Shirantha Beddage and Alexis Baró co-opted into the Exile community too. All of this adds up to Elementals becoming an irresistibly beautiful album from the Jazz Exiles with the leader of the tribe, Mark Kelso bringing all of his Celtic magic into play for this endlessly ‘shape-shifting’ music.