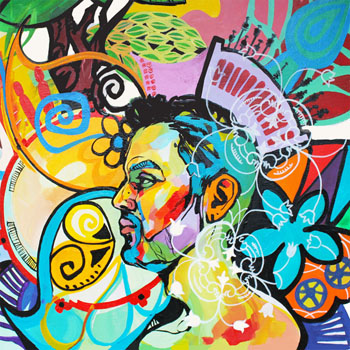 Only a handful of recordings are going to impress the way Na Eira, the third disc from Marito Marques will as its music unfolds to reveal one of the most talented young multi-instrumentalists who has made Canada his home, despite letting his heart roam wherever music is made. It is hard thus not to be drawn into its deep wellspring, not only of rhythmic character, but also by its spirited, dancing melodies. As a result, for those of us, utterly entranced by much contemporary music – Snarky Puppy comes immediately to mind – it will probably come as a surprise as well that the music of Na Eira is often, throughout the record, much more interesting.

Marito Marques is principally a drummer but he is also everything else, including a truly gifted composer, whose writing celebrates the exhilaration of belonging to a planet where music unites humanity. In this regard, there are probably many ways to make an uplifting album, but one that manages to convey its deeply personal sources of inspiration, while at the same time welcoming the listener into its music, is surely one of the most satisfying. So it is with this third outing for composer and musician Marito Marques, offering a set of nine pieces inspired by real-world ideas, people and situations but infused with the kind of heady imagination that transforms their resonances into a series of musical adventures.

These nine original tunes (written by Marito Marques with, I should add, the assistance of Munir Hossn and João Frade) reference all manner of sources without any sense of contrivance, traversing deep and glorious African-bred spirituality (“Ó Águia Que Vais Tão Alta”) with the majestic voices of the vocal group ADIATA), and the wonderful musical things contained in the Griot tradition of West Africa (“Agolo” and “Dia Chuvoso”, with the vocals of Yami and “Fosa” with the celestial falsetto of Woz Kaly) are part of a performance that transcends either Portuguese or Brasilian music (Marques home-turf) or, for that matter, any percussion-driven music, or even Blues and Jazz which is the closest approximation one might make regarding the repertoire on this album.

All of the infectious grooves that you hear in this music from “Agolo” with the skittering pulse of the kalimba played by Marito Marques and Jorge Pardo’s ululating flute, Yami’s intoxicating narration and Munir Hossn’s galloping bass line, seem endless. Or in the rumbling bass of Rich Brown on “Rosa”, or the rousing vocal percussion by Tito Paris on “Bica”. And this is even after you get past the glorious “Na Eira”, one of several tunes that feature spectacular performances by pianist Robi Botos and conguero Jorge Luis “Papiosco”. So it happens that you wish there was more by the time “Scábias” with Yvette Tollar’s breathy vocals comes to an end.

Through it all one cannot help being open-mouthed at just how many wonderful musical things come from Marito Marques – from melodic to pounding drum lines – to a palette that proffers a myriad percussion colours and a feisty kalimba – as he puts the breadth of his talents display. All of this as he and his music traverse the many territories with a natural ease, to spring enough good-natured surprises on the listener to dismiss any notion of complacency. The recorded sound is also expertly shaped around both the group and the excellent soli.