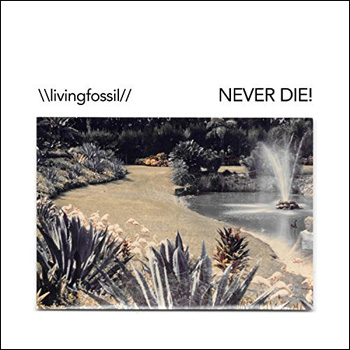 The only whimsy that you will find on Never Die is that of the name of the ensemble that makes this music, Living Fossil. But there is a kind of deliberate irony in the name as it is almost customary today for young musicians – especially composing ones – to tend to “show” some distance from tradition. This band, however, takes its name Living Fossil, and gets its lead voice from Gordon Hyland a tenor saxophonist who seems to envisage his music as rooted in the long and sacred tradition of the tenor saxophone going back from Wayne Shorter, Pharoah Sanders, Dave Liebman and other noted neo-spiritualists to others such as who followed in the great wake of John Coltrane. But Mr. Hyland also looks far forward and his proclivity for crashing into the portal which leads into a world where many modern musical styles collide. As a result his music is woven from threads that suggest a fabric that is alive and unfolds like mural depicting and gloriously flapping away in the cool breeze of the Jazz music continuum.

You can hear a sense of freedom in the balletic music of “Lorraine” and “Baby Steps” because both works lean on the more traditional-sounding pillars of romanticism in the elegant balladry. This has much to do with the sonic richness of the additional tenor saxophone in the form of Mike Murley and the imposing grandeur of Vivienne Wilder’s contrabass. You also soon realise that the lyricism of the ballad is, in fact, a way of life for Mr. Hyland. The tenor saxophonist also gives us a glimpse of this and his exceptionally emotional playing on “Meta Max” where his sumptuous tenor sound is brilliantly caught – as it is everywhere – by the recording engineer, Andrew Mullin. But while at heart, Mr. Hyland is a dyed-in-the-wool Romantic is the finest sense of the word and tradition, he is also consumed by wanderlust.

The sense that this is a record by Living Fossil that is continuously seeking to push at boundaries is everywhere in this music. The first three tracks set an outward-bound course for the music, as if forming a soundtrack for the band’s lift-off into interstellar regions. Then comes the middle of the recording, when the musicians find themselves at cruising altitude, propelled into the inevitable infinity of their art, we hear a collection of pieces that are full of the drama and beauty of earthy, visceral passion. Hardly surprising that the album should end in a beautifully crafted re-invented “Unforgettable” played in its new incarnation as “Lessforgettable”, which is ironic, because this is a grand finale to remember this superb ensemble by.