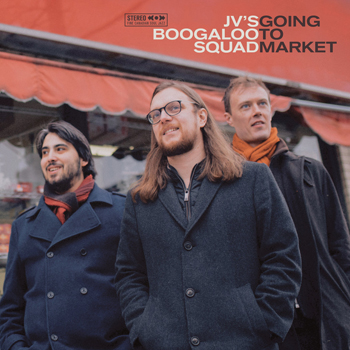 It has been a very long time since I have heard an organ-driven trio sound this impressive. Part of the reason has to be that organ trios turn out almost all-too-predictable fare and thus have an “almost-sameness” about them. And then there is the technical wizardry of Joel Visentin, who leads what he calls JV’s Boogaloo Squad. If the title is a dead giveaway, Mr Visentin probably intends it to be that way. This is, after all, a rollicking “boogaloo” album and it’s high time we had one. But one this good? That’s not only been a long time coming but, as it turns out, well worth the wait. I’m not sure that Mr Visentin thinks of his Boogaloo Squad as an “organ trio”, but his mighty Hammond B3 is at the heart of it and the leader extracts everything “big” out of the instrument – its churchy fervour, it’s rocking and rolling “organic” sonic warmth, combining his unusual modal style with the imaginative use of the instrument’s controls to produce the overtone-laden, otherworldly sound that is his trademark.

The repertoire is steamy, whip-smart and boogaloo-crazy. It is loud and raucous, incredibly melodic and outstandingly harmonic, pulsating with rhythmic invention – of course, how can a boogaloo record called Going to Market be anything but all of the above. Mr Visentin’s approach to the instrument is well-formed and mature; his style is deceptively limpid and his euphonious tome artfully leavens his logical, but nonetheless oblique and unpredictable melodic thinking.

The added support of Adam Beer-Colacino on guitar and Jeff Halischuk on drums – together with powerhouses such as Kelly Jefferson and Alison Young (on “Squadzolla”, “Capybara Walk” and “Market Research” respectively) makes this set a must-have. Old material such as “Chain of Fools” is wildly refreshing and the original material is breathtaking. Pick any tune from among the ten here and you will have the added pleasure of discovering a young Torontonian who can really write interesting music. The guitarist also contributes on two tunes. But overall this is a showcase for this organist who seemingly has everything going for him: from “musical” ideas to “musical” execution in every sense of the word, a deep sense of history of Jazz and every other style in the book and the wherewithal to put it all together in a manner that is refreshing and singularly authentic. An album to die for…

Eucalyptus: Kick It Till You Flip It