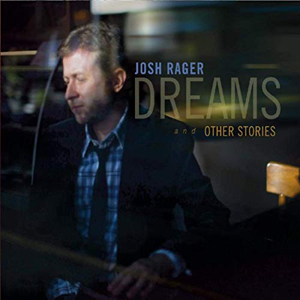 Considerable time has passed since we have had the pleasure of another recording from pianist Josh Rager. Dreams and Other Stories was well worth the wait. Once again Mr Rager treats the listener to his special brand of poetic intensity both in the works more familiar to us as well as by his original work. The last track first, though: How refreshing it is to listen to a work by Olivier Messiaen, who seems not to be the darling of too many pianists of Mr Rager’s generation despite the fact that he was the inventor of thrillingly sensuous music of bright acoustic colours and resonant fades as he almost single-handedly created a vocabulary that was eagerly seized upon by the likes of Iannis Xenakis, Pierre Boulez and Karlheinz Stockhausen.

Mr Rager closes his album with “O Sacrum Convivium”, a deeply meditative work that features a fantastic spatial dimension brought about by Mr Rager’s sensitive pianistic imprimatur, which also takes a luxuriant view of Messiaen’s score, lingering over the work’s rapturous and spiritual side. But all of this comes, of course, after Mr Rager has established his own pianism. Herein lies some very classy piano playing. Mr Rager can be driven to produce much edge-of-the-seat virtuoso risk-taking and this he does in Rogers and Hart’s “Spring is Here” which, characteristically continues into “Twinkle Toes”, the first of five originals.

The entire original repertoire is carefully conceived and crafted for winds and rhythm section. The fact that Mr Rager uses both alto and tenor saxophones as alternating lead woodwind voices broadens the palette of colours enormously. And it is always a treat to listen to Kenji Omae leapfrog over Donny Kennedy and vice-versa. The pieces are long enough to give each one of the saxophonists to stretch and explore and sculpt long melodic inventions when they are called upon to solo. Bassist Fraser Hollins’ playing is ever so eloquent indeed. His voicing is expertly balanced in each instance and he is more than masterfully supported by Dave Laing on drums.

Of course, this is Josh Rager’s record and his pianism sparkles like a rare gem. His fingerwork is scintillating everywhere, especially on the Messiaen piece. But even in the rest of the repertoire Mr Rager plays with enigmatic beauty. His insightful colours have the measure of the kind of limpid introspection and fantasy that suits this material to the tee, ultimately making for a disc to die for.