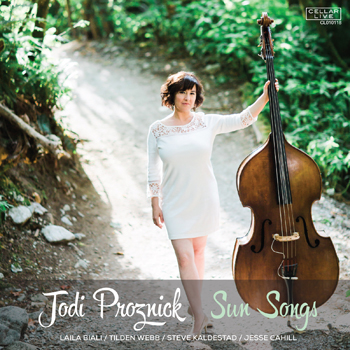 It is so rare to come across an album of music which draws you almost instantly to its beating heart, and by that one is referring to its sheer songfulness, notwithstanding the word ‘song’ being one half of the title. But that is exactly what will happen upon listening to Sun Songs by the virtuoso bassist Jodi Proznick. Each line is the epitome of melodic perfection. The tuneful purity of the music is embodied it would seem, in the littlest phrase. This is quite a magical quality for even the finest music to have. Black dots seem here to leap off the page at the hands of each of the participating musicians starting with the songs’ creator, Jodi Proznick herself but that will seem less of a surprise when one considers that for music to be so evocative it must be heartfelt. And indeed this is exactly the place from which each beckoning melody has sprung.

Still to be able to turn the tragic news of her mother’s diagnosis of early onset dementia into something both bittersweet and beautiful – even heroic – and for the birth of a child to be reflected exactly as it is: life-changing it must take an enormous talent for song-writing and clearly Jodi Proznick has this in spades. So even as the black dots of the written page take flight, they acquire a pristine sound so natural that they become almost human cries of sorrow and of joy. Moreover, (as is the case here) one can almost hear the ring of soprano femininity even before vocalist Laila Biali so much as sings a note. Of course, once she does a whole new world of near mystical beauty accrues to this music. Miss Biali sings the lyric poetry of the words in an immaculate voice; pure and high-sprung. The songs speak to Miss Biali in a very special way and so she is able to articulate every nuanced emotion that has been written into them by Jodi Proznick. With Miss Biali’s voice the words of “Listen” literally rise to a rarefied realm.

In writing one must also be forgiven such seemingly excessive hyperbole for Jodi Proznick merits all of it. As in her songwriting so also in her talent for playing the contrabass she is able to pull off magic that is as near perfection as bass-playing could possibly be. She manages to clothe her spritely pizzicato in a seemingly diaphanous melodic raiment that is as breathtakingly alluring as the energy and combustion that accompanies the rhythmic accents and suddenly her bass-playing seems to pirouette and gambol alongside the melodies as if it has become a living, breathing thing, as the bassist’s music becomes in every sense the poetry of feeling. At the same time Miss Proznick has impeccable time and she becomes a perfect partner for Jesse Cahill’s lively drumming. Steve Kaldestad’s role here is that of a vividly created doppelgänger and in both melodic and harmonic sense he plays it to the hilt.

Finally there is Tilden Webb who also embodies the music as if it were his own. What he does best throughout the album is to act as a perfect foil for the vocalist Laila Biali. From “Listen” to “The Book of Love” Mr Webb’s piano is no mere accompaniment to the singer but a protagonist in its own right, playing its part in the creation of the emotional drama. And there is plenty of this throughout the album, which is clearly the finest of Miss Proznick’s stellar musical career.