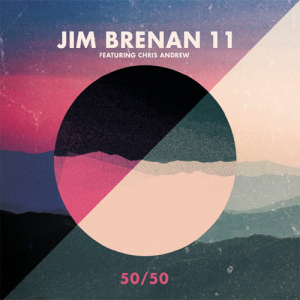 The fact that Jim Brenan is able to put together a big band and produce this album 50/50 – with funding assistance from the government-assisted Alberta Foundation for the Arts – in the Western Canadian with the most celebrated economic troubles in North America is not only proof that support for music (arts, really) by Canadian governments no matter what the political spectrum is extremely heartening. There is, of course, the larger and more important picture to be had: and that is the fact that the music is of an extremely high quality. This, of course, is not surprising. The acceptance of Canadian musicians following in the footsteps of Oscar Peterson, Glenn Gould, Gil Evans and Gene Lees (to name, but a few) in the North American artistic mainstream has long since been a welcome reality.

So while the reeds and woodwinds specialist Mr Brenan may not be the first of his kind to ascend to a higher tier of artistic proficiency ought not to come as a surprise. However, that may not preclude his making a record of the highest quality; except that 50/50 is just that kind of recording; one that marks Mr Brenan as a master of the (at least) four instruments he plays here. It also serves to give notice that he is no longer a composer-in-waiting, but one so accomplished that – by the end of this recording – one might anticipate anything more from him with great expectation. Once you listen to the music you also come to realise that spotlighting keyboardist Chris Andrew is also one of the more inspired features of this music, bringing a harmonic dimension that is redolent of the sound of Clare Fischer; an oblique doffing of the proverbial hat to the master of electric keyboards. His performance on “Jocasta” harkens to the music’s Grecian inspiration while keeping it swinging, relevant and utterly contemporary.

But most the best aspect of the repertoire is that all of it is rooted in simplicity. The melodies are songful and rhythms are such that they do not require advanced mathematics and wading through complex time-signatures and tempi to decipher, let alone appreciate the naked rhythmic beauty that is expressed by Mr Andrew together with bassist Rubim De Toledo and drummer Jamie Cooper with percussionist Raul Tabera adding carefully to the colour palette with his Latin percussion. The idiomatic playing of each of the soloists – led, of course, by Mr Brenan on each of the four horns he plays with uncommon virtuosity – suggests that the writing is of a very personal “Ellingtonian” nature – “Ellingtonian” because the characterful playing of each musician seems to be a leaping off point for Mr Brenan’s writing – playful enough to enable Sean Craig’s elliptical solo on “Ozark Mountain Cougar Fightin’”, meditative, in keeping with Craig Brenan’s playing on “Eleven Eleven” and on, and on.

Mr (Jim) Brenan’s own play is chameleonic and appropriately so. He plays tenor and soprano saxophones requiring two virtually diametrically opposite kinds of blowing, tonguing, etc. His clarinet playing is marvellously controlled – especially his work on bass clarinet on the closing chart of the album. The balance between composition and improvisation is generous and allows each musician to stretch and express himself and extrapolate on each of Mr Brenan’s melodic ideas. Chris Andrew’s arrival at solo-time always lightens the density of the music. His performance on instruments that have a bright tone combine with his feather-light touch and use of nuanced dynamics make for contrasting tone colours that keep the music ever fresh as it is developed from the starting point of each melody until its inevitable dénouement. All in all this is terrific music-making by any standard.