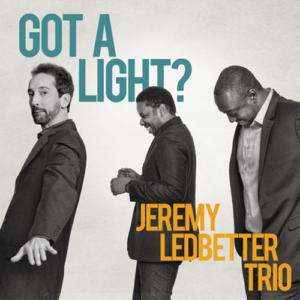 Jeremy Ledbetter has traversed a fairly wide musical topography: from the Caribbean with his preeminent ensemble Canefire to weaving his virtuoso pianism into the Venezuelan soundscape with his wife, the eloquent vocalist Eliana Cuevas, as well as pouring the molten vigour of his pianism into the endless possibilities of Mark Kelso’s Jazz Exiles. To find him, then, in the relatively spare environs of a trio is something of a surprise. However, this is no ordinary trio by any stretch of the imagination. It features the celebrated drummer Larnell Lewis and another musical phenomenon from Toronto, the bassist Rich Brown; extraordinary bedfellows for Mr Ledbetter to share his maiden voyage with as master and commander of a piano trio.

One might have expected to find a pianist in search of a voice – certainly most debut recordings by someone of Mr Ledbetter’s generation end up this way. But that is not the case with Got a Light. Here is music not only be a seasoned campaigner, who simply paid his dues in the underbelly of Toronto’s music scene before settling into the piano-stool to tell his own story. And it’s a compelling one. The music is viscerally exciting right off the bat. There is also a beautiful lyricism to his piano writing and more than a hint of rigourous classical training. Thoughtful accounts of the influence of Latin-American music emerge in the singular, intricate lines of sumptuous harmonies of “Amanecer”, “Mais Um” and “Suspirito”.

Elsewhere, on “Got a Light?”, “About Climbing Mountains” and “Gift Shop” the trio’s rendering of Mr Ledbetter’s music are stunning. Mr Lewis’ and Mr Brown’s playing is alive to the subtle phrasings and elegant counterpoint provided by Mr Ledbetter. Overall this is a showcase of a mature musical mind; a dynamic programme, with improvisations bubbling as if from a powerful vortex of sound. Meanwhile our protagonist, Mr Ledbetter, is revealed on his instrument in a setting that is utterly beguiling, continuing, of course, to examine that mysterious relationship between the way each finger depresses each piano key and the effect that has not only on the complex mechanics of the hammer, but also on what it reveals about the machinations of his musical heart. And by the end of the record we emerge from a masterclass provided with careful control of nuance, the melodies and harmonies soaring with ineffable beauty and chords emerging with supple rhythm.