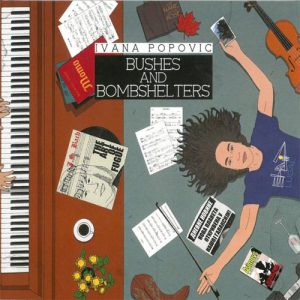 A considered exposé of the musicianship of Ivana Popovic and her still woefully underexposed genius is always welcome. Those of us who know her work from the classical music realm will not be guilty of this, but not many are aware of her abilities – both as a vocalist and violinist – outside of her performance of classical repertoire. Now there’s a chance to catch up with Bushes and Bombshelters a dark and beautiful recording that tells her story in a very different manner. The lingua franca here for Miss Popovic is her Serbian background, no doubt deeply affected by the strife she has lived through, but still extraordinarily expressed with deep finery on a gloriously coloured and textured musical canvas that is a moving and breathtaking experience.

Making this deeply elegant music requires a particular sensitivity to linear shape, lyrical articulation, clarity of texture and – even in the direst of situations and storytelling –with a certain romance; the kind that characterized a narrative folk ballad. Vocal romance arrived in mid-century Europe (France, to be exact) but instrumental romance – the kind with which Miss Popovic plays her “other” (principal) instrument was initially applied to slow movements with a songlike theme, and this began infiltrating large-scale abstract composition from about the 1760s. On Bushes and Bombshelters Miss Popovic shows that she has the measure of this in spades and it is all over the music we are privileged to listen to here.

Miss Popovic’s extraordinary debut album shows her heading into the countryside of her childhood not only to make friends with the creatures of the woods but it also paints, with vivid strokes, that pain of having gone through the tragic breakup of the Balkans with a communicative articulacy that is full of abject heartbreak and pathos as well. The dolorous sound of the trombone, for instance, takes us through the bleak landscape of “Bushes and Bombshelters” making its goose-stepping way together with the percussion as Miss Popovic’s electric violin intones, with wounded wail and howl, the sights that she brings to life before our eyes.

Later, evocative of freezing nights and long rainy days the music takes us through a natural landscape that mixes beauty and danger, the sounds of birds and animals – and most of all people, who becomes our travelling companions just as they became Miss Popovic’s as she journeyed through a bleak place that entailed going back in time as in “Sketches from Serbia” through “Donald in the Woods”; through the lonesome environs of “Blue” and the hauntingly beautiful “Going Home”. At every turn Miss Popovic captures something viscerally spectacular, often bleak and yet, somehow, beautifully permanent as well. Folk and classical traditions have seldom come together as gloriously as on Bushes and Bombshelters