The boldness of this fresh and vivid repertoire by In Orbit should be resoundingly applauded. For in a world where there is no shortage of identikit music billed either as “funky” or anaemic “fusion” – both empty epithets almost always bereft of depth and meaning – this group comprising heavyweights such as Jeff Coffin, Michael Occhipinti, Tom Reynolds, Felix Pastorius and Davide Direnzo has certainly turned in a programme that is not only viscerally energetic, but also whip-smart, unpredictable and open to new and excitingly off-the-wall crazy ideas. 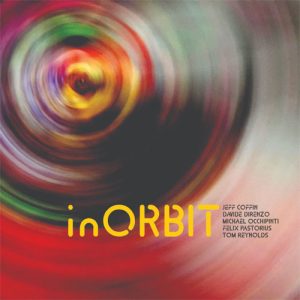 of music: including a Jazz round-trip Jazz that begins and ends in New Orleans, via rock, soul and electro-pop; ground into a fine mixture by a guitar, saxophones and flutes, keyboards, bass and drums in a sonic kinship that finds the musicians and music feeding off each other’s music in an almost anthropophagic manner.

The music is kick-started with a raucous doffing of the proverbial hat to New Orleans Second Line with Mr Occhipinti’s “Big Belly” as the instruments make their stabbing way through the heavy rhythm-driven melodic inventions You know at once that this ensemble once again reinvents the notion of Jazz fused with a world of musical styles and idioms.

Mr Coffin is the magnificent lead voice with his reeds and winds doing what he has done so exceedingly well in so many arenas with his MuTet, the Dave Mathews Band and Béla Fleck and the Flecktones (among others). Meanwhile the percussion colouring gets a thunderous cranking up of the bass with Felix Pastorius’ virtuoso playing which results in a burgeoning of the group’s dynamics, further enhanced by Mr Reynold’s together with the often-quirky interpolations from Mr Occhipinti when he manipulates his electronic effects.

While not a word is sung, the music continues to be songful, occasionally making way for riff-laden music such as “The Mad Hatter Rides Again” which has a rippling jazz groove that roars into the song’s mid-section built under Mr Coffin’s complex boppish runs. Elsewhere – on “In Orbit”, for instance – the music is launched by a broodingly percussive tumbling groove. And by way of contrast the ensemble swings on tunefully arranged songs such as “Unity” and “One Eyed Rabbit”.

Each musician contributes almost always equally to ringing in the changes in mood, structure and (certainly) tempo, making for a constantly interesting programme. The considerable degree of balance and integration, melody, harmony and rhythm, of composition and improvisation, of exploration, individuality and tradition is impressively maintained throughout. It’s no wonder then why this album – which one somehow senses is just the beginning of a rewarding relationship between the musicians – has music that will ring in the mind’s ear for a long time to come.