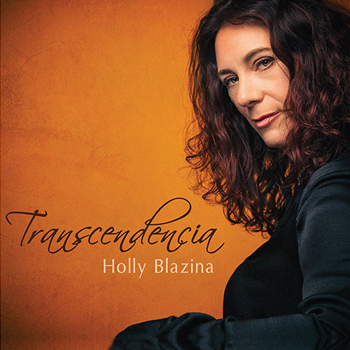 With this relatively short, but breathtaking programme on Transcendencia the Canadian Flamenco guitarist Holly Blazina has joined herself inextricably to the beating heart of Andalusia, except when her heart beats for South America as well. The result is Transcendencia, an album that takes an impressionistic journey through Flamenco music and dance with a series of poetic works full of shimmering and diaphanous textures. There’s a wholely natural feeling to the way the climaxes and sudden changes of direction are so perfectly judged in this performance – a measure of how well the protagonist, Holly Blazina, knows this musical tradition. From the perfumed heaviness of the opening rapturous guitar arabesques, beginning on “Con La Corriente” and continuing throughout the recording, a richly mysterious mood is sustained.

Miss Blazina plays with total commitment to the idiom of the music – especially of the Flamenco Palos – and it shows in the craftsmanship of the compositions – written in a strikingly accurate manner – that pays tribute to the Spanish and Argentinean (when called for) traditions. The whole programme is shot though with ‘Spanish’ colour, at times raising the spirit of classic duende, not through the precise quotation of specific folk songs, but by the subtle utilisation of effects – strumming chords, incessantly repeated phrases, declamatory unison passages (on piano, saxophone, violin and, magically, on the santur too) – which suggest the rhythms and cadences of Flamenco song, as filtered through the memory of a dream.

The ‘Bulerías’, “Transcendencia” and “A Sergio” are absolutely electrifying, with brightly vivid and energetic playing from an obviously enthused Miss Blazina. There’s also an intensely theatrical feel to the proceedings on “Homenaje a Sabicas” and in “Invocación” Miss Blazina features an authentic Flamenco singer in the form of Stephanie Pedraza, who does justice to the passionate vocal outpourings that punctuate the score. Listened to a second time, the recording appears to abound in the most sparklingly exuberant array of melodies that seem to dance with vigour as the rhythmic adventurousness of Holly Blazina and her music grows on you, the listener who is, by now, quite mesmerised by this music.