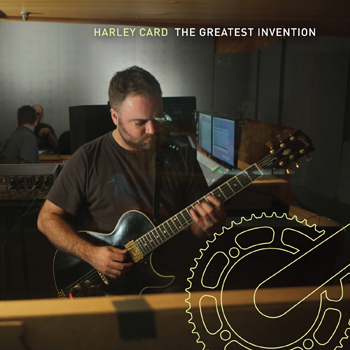 The Greatest Invention refers to the bicycle which, as Albert Einstein called it, was not only his idea of the greatest invention, but also one on which he rode in order to think and, if Einstein trivia is to be believed, where the scientist had his first thoughts on the Special Theory of Relativity. For guitarist Harley Card the album features beautifully crafted compositions and arrangements of a beguiling array of music, sensuous in every lovingly phrase caressed not only by the guitarist, but also his piano-playing doppelgänger Matt Newton, with other regulars: bassist Jon Maharaj, drummer Ethan Ardelli and saxophonist David French too.

Harley Card is well-known and admired in the trenches of Canadian contemporary music. His deeply-felt lyricism is much loved by his peers and his own love for the instrument that defines this, his third album shines brightly. His writing is multi-layered and although it is performed here by a quintet, listeners will be forgiven for believing that they are being played by a somewhat larger ensemble; the music has somehow been made to sound really BIG. Listening to the way that Mr Card bends the notes in “Precipice” and “A Distant Bell”, and how he sculpts the long sustained invention of “Grace”, it’s clear that not a semiquaver hasn’t been fastidiously considered.

Featuring his long-time rhythm section of bassist Jon Maharaj and drummer Ethan Ardelli, together with pianist Matt Newton – and now with saxophonist David French on top of everything Harley Card’s musicians seem completely attuned to his vision and artistry. Although this is a flawless record one simply cannot but help muse what might have been had Mr Card invited a vocalist to share the limelight. It’s just that kind of lyrical repertoire that would have been perfect for a lithe soprano to be heard floating atop some of these melodies. Perhaps that will come in the not-too-distant future on a Harley Card recording.