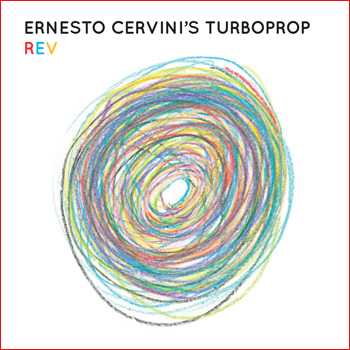 Ernesto Cervini’s Turboprop is a vibrant sextet; just one facet of the composer and drummer’s prismatic musical persona. Each of the aspects to Mr Cervini’s music seems to add layer upon layer of colour to the palette which informs the music. Somehow the cover design to this recording seems to have captured this in a wholly appropriate manner. This is, however one side to this album: the imagistic; almost ‘visual’ side to the music. More importantly, there’s the rhythmic side, which cuts deepest into Ernesto Cervini’s music (naturally, for he is a drummer). But there are also other things that come naturally to Mr Cervini and not all of these are – or have been – made obvious in the career of the young musician – certainly not on any of his music that he has made so far with trios and other larger ensembles.

First off there is the small matter of his multi-instrumentalism – an authentic one at that. He rarely plays clarinet or bass clarinet or any of the other reeds although he has done so when pushed into it. And he is a composer of considerable talent. This too remains largely hidden in projects such as Turboprop. There are just two compositions of his on this album. Still, with each successive album that the drummer plays on he has crafted a career in which it can clearly be said that he worships at the altar of originality. His unique sound has been shaped, of course, by the fact that he is a gifted multi-instrumentalist. This helps enormously in the music of Turboprop, which employs brass and winds – in addition to the piano and bass of Myriad 3, the other regular (trio) which whom Mr Cervini plays music.

There is a quartet and also MEM3 which also feature Ernesto Cervini’s music and his drumming but it is with Turboprop that hosts his music on the largest palette. Rev is no exception. In fact, it is a recording which features the music is its richest and most sublime form evocative of a musical landscape that offers the most potent mixes of beauty and risk. Listening to the way in which Ernesto Cervini’s Turboprop seductively bend and shape notes, and how they come together to sculpt the sometimes long, sustained inventions it’s clear that there’s not a single semiquaver that hasn’t been fastidiously considered.

Featuring a robust rhythmic partnership of bassist Dan Loomis and pianist Adrean Farrugia together with saxophonists Joel Frahm and Tara Davidson and William Carn on trombone these are all musicians who are completely attuned to the drummer’s vision and artistry. Each musician, together and separately, delivers a hugely powerful performance, and together they are especially beguiling on Radiohead’s “The Daily Mail” and the gorgeous arrangement of Arthur Johnson’s “Pennies From Heaven”.