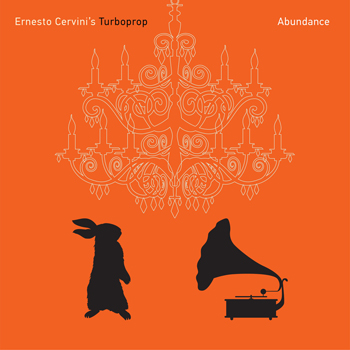 Hard on the heels of their marvellous 2017 release Rev (Anzic Records), Ernesto Cervini’s Turboprop now proffer another sextet celebration. Once again unfolding the three-horn frontline this disc is appropriately entitled Abundance; appropriate because it is not only brimful with energy, but also seems to boil over in that department. The eight works are presented for maximum musical impact and contrast opening with Tara Davidson’s whirling, swirling-in-the-horns chart entitled “The Queen”, followed by Tadd Cameron’s bebop classic and drivingly rhythmic “Tadd’s Delight” and seeming never to stop bubbling over with kinetic energy from then on. Each song also comes with a structural twist. “Harold Arlen’s svelte chart “My Shining Hour” is expressive, with the proverbial heraldic horns. Magically, the stylistic focus varies bringing in a twist (such as the Latin tinge on the Arlen); specific elements have been worked out thoroughly without becoming relentless or obsessive.

Turboprop music is sometimes incorrectly labelled as “mainstream”; for what it’s worth “contemporary” may be a more appropriate moniker simply because of the constant desire of these musicians to “make it new”. And this is evident not only from the arrangement of the Arlen song, but also in the presentation of Charlie Chaplin’s iconic “Smile”, in which the simplicity of the original is wonderfully melded in with a set of theatrical twists and turns in this Turboprop versions that makes the group’s new version contain a vivid endearing narrative all its own. Each member of Turboprop also brings his and her own personality to the group and its music and this is clear from how different Dan Loomis’ “Abundance Overture” is from Tara Davidson’s work as Mr Loomis’ song eloquently demonstrates. It is (perhaps) the most enigmatic composition on the recording, building up in layers within a simple arch-like form.

And then there is the music by Adrean Farrugia and, of course, drummer and leader Ernesto Cervini. “The Ten Thousand Things”, naturally centred around Mr Farrugia’s mesmerising pianism builds up from a dusky meditative start and builds in volume and intensity as it swells up in tone and seemingly awakes from its pastel colours into a frenzy of horns led by Joel Frahm’s bold expressive tenor saxophone which then melts into a mélange of horns played throughout the final ensemble work with élan by trombonist William Carn as well as by the radiant Tara Davidson on soprano and alto saxophones. Two songs by Mr Cervini close out the album. The first is a contemplative portrait entitled “Gramps” that is imbued with great character and charm. Finally there’s “Song for Cito”, which comes across as a touching homage that has a touch of fantasy and glorious colour. One would expect nothing less from such a wonderfully focused ensemble such as this, which is one to die for.