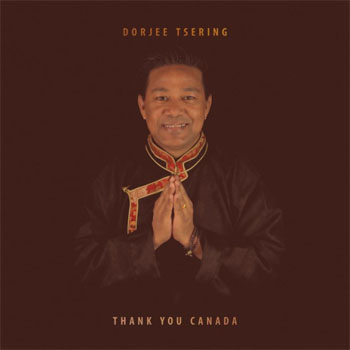 Before Dorjee Tsering became a Canadian he was (is and will always be) Tibetan first, born like so many of his fellow Tibetans, in exile in Dharamsala, India. Tibet is not in India, as some people think. It is a small storied Himalayan kingdom occupied by the Chinese for decades. Tibetans still living in Tibet have the same sense of longing as those living in exile because their Buddhist faith enables them to see – through their special pain – their lives each day in a constantly new light, as a series of seemingly unrelated jewel-like stories within a dazzling setting of change and transformation. Recognising where they stand, and they are able to watch where they put their feet. That’s when a path appears.

Ever on the path to this enlightenment Dorjee Tsering has raked up the autumnal leaves where memories are often buried and left to moult, and he has produced Thank You Canada, a powerful and significant collection of songs sung in Lhasa, an Ü-Tsang dialect of modern Tibet. It’s a pity that the lyrics of these songs on Thank You Canada have not been printed in a bi-lingual edition – but from what Mr Tsering has described in his notes that explain each title one can glean the gist of what they are. As it is we do not need – have never really needed – lyrics to follow feelings and emotions; certainly not when the music carries emotions on the wings of its poetry. And here is where Dorjee Tsering is at his finest.

You needn’t understand lyrics to fall prey to the charms of “Gongsa Chok”, for instance. Like the other songs in this repertoire, the sensuous, dream-like quality of Mr Tsering’s music is offset by an intensity which raises them above the salon fare of most popular music of today. It also suggests a kinship with someone like Paul Simon -that master technician of song- in that Mr Tsering like Paul Simon can create an epic narrative setting to fulfil the impulse of even the slightest, most nuanced emotion. Often – as in “Thakring Kyi Garog”, a masterpiece of musical form – we have a striking way that an anxious rocking accompaniment and contrastingly calm refrain captures the voluptuous mood of the song. Elsewhere on (“Gaychu Yang Nyen” and “Bhod Kyi Bumo”) the recording undulating orchestral accompaniment characterises the romantic setting (the latter piece) or a glorious one (as in the former song).

Orchestral setting is something that Dorjee Tsering knows much about. He is part of the new and already-celebrated New Canadian Global Music Orchestra, a project masterminded by Mervon Mehta, Executive Director, Performing Arts of the Royal Conservatory of Music in Toronto. Moreover on Thank You Canada he has the talents of the brilliant producer and arranger Lou Natale, who has, for his part, spared nothing to get the most luscious best out of this music. In all of this is a group of the finest Canadian journeymen in music and the superb ear and guiding hand of Jeremy Darby, someone in whose likeness all recording engineers should be made.