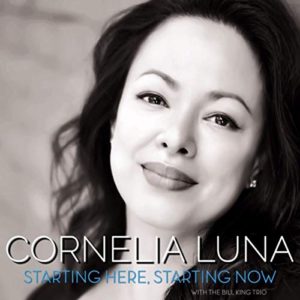 Barbra Streisand has carved a niche for herself in vocal music that is so unique that it’s difficult to imagine anyone occupying one even remotely close to hers; which is why Cornelia Luna may have pulled off a near miracle by giving us Miss Streisand’s iconic music in a profound and benchmark performance. Working with the Bill King trio to make this happen has also proved to be mutually illuminating. Featuring beautifully crafted arrangements of beguiling variety and sensuousness, in every lovingly caressed phrase of Starting Here, Starting Now, Miss Luna’s love for the Haloed Princess of Song’s music shines brightly. The chosen material with one or two notable exceptions, judiciously focuses on some of the lesser-known gems associated with the incomparable Barbra Streisand, who put such an indelible stamp on the art of song.

Listening to the way in which Miss Luna seductively bends the notes in “Loving You”, and how she sculpts the long sustained inventions of “Soon It’s Gonna Rain”, it’s clear that there’s not a semi-quaver that has not been fastidiously considered. Her intonation is nuanced and this goes directly to the manner in which she makes the emotion of the lyric come alive. Throughout Miss Luna reveals herself to be an artist of the first order; her maturity – even on this debut recording – broadening out from the popular repertoire that one might expect a younger vocalist such as her to gravitate towards. Her instrument is gorgeous: lustrous, precise and feather-light. Her musicianship is fierce as she digs into the expression of each word, bringing ceaseless variety to soft dynamics and giving every phrase inimitable grace.

This debut feature has been shepherded to fruition through the quiet genius of producer Bill King, whose fluid, evocative pianism is all over this recording. Mr King is also joined by the celebrated bassist Dave Young and the inimitable Mark Kelso, whose performance is suggestive of the kind of percussion colouring that is rarely heard today. The tenor saxophonist Mike Murley and trumpeter William Sperandei also grace two charts and vocalist Gavin Hope brings a delicate urgency to “Any Moment Now”. Together all of the musicians are gloriously attuned to Miss Luna’s artistry; all of which adds up to the many reasons why this album celebrates not just the music of Miss Streisand; but the arrival of a star vocalist and musician – Cornelia Luna.