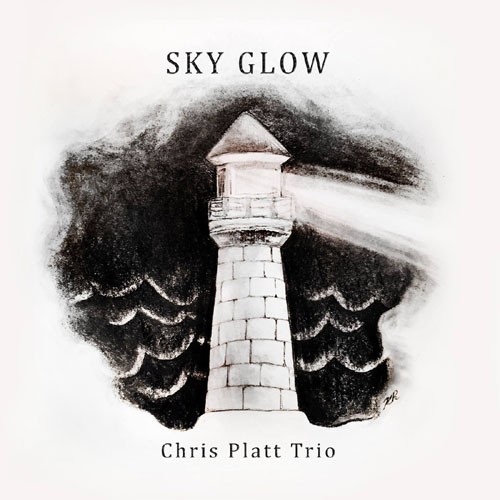 The first thing that will strike the listener about Sky Glow by the Chris Platt Trio is the absolutely pure sound of Mr. Platt’s guitar. The sound of his electrified instrument is the closed that one has ever heard to sounding like that of an acoustic – even unamplified – guitar. Perhaps without even without meaning to do so (for this is a trio record), Mr. Platt conveys a sense that his guitar is an ensemble in itself. Right from the languid elegance of “I Like the Sad Ones”, Mr. Platt shows that he has a huge vocabulary of sounds. He ushers in the melody with rangy harmonics, with pizzicato and technique exotica that, in his sharp enunciation of notes, suggests nail-like sizzle and a subtle bi-tone tapping as well.

Together with that show-stopping opening chart, Mr. Platt’s other five other songs represent a raft of adventurous works, almost seemingly independent of other guitarists’ schema and influence. His work also shows that he is extremely lyrical, with a tendency to write music that is naturally bittersweet. Mr. Platt thinks big. His works seem to embrace the vocal as well as the instrumental aspects of song even when they rely on dissonance. In fact, one can envision words being added, which would, of course, make them interesting narratives with a different kind of story appeal from their somewhat impressionistic sound world in their current incarnations.

While Mr. Platt is the lead voice here he has chosen his company well. Both bassist Phill Albert and Robin Claxton embrace the richness of their respective instruments with an inspired completeness. They are also completely in tune with their leader’s artistry and vision for this album. Together this trio conveys not only that it is musically adept, but also excited to make their music together. Each musician also enriches the performance of the other and each they all seem wonderfully at ease with one another. This is a short set of music that is performed with flawless articulation and a ravishing display of uncommon musicianship.