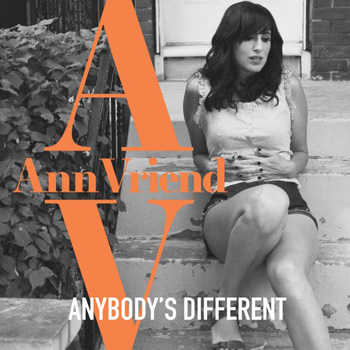 An extended play is a curious package for a musician. As a stand-alone disc it does not have enough material to make what is generally understood to constitute a complete album, and yet it is more than a conventional “45”, that is, two sides of a small record. And many a time it is missing a sort of theme so one is never sure if it usually is music the artist couldn’t bear to throw away after making the album. But not this music by Ann Vriend, which already states on its cover even before you’ve heard a bit of it, that it’s Anybody’s Different. The five pieces are completely arresting, sung in inimitable style by Miss Vriend, who is a wonderful, sultry-voiced contralto, whose bluesy vocals come with dark, piercing anguish and warm outbreaths of intensity.

Ann Vriend, is indeed, as the title suggests, a “Different” vocalist. Even in the accompaniment of herself on piano, she plays expressively – as sensitively as her she sings – adding to the sense of awe and wonder that hovers over this entire recital. In addition Rooster Davis’ B3 organ-playing provides an ever-shifting heartbeat behind the wonderful, supple expressive contours of Miss Vriend’s voice both eloquently tracing those of the melodies. Most enticing is the smooth, aching melody of “Real Love” in which Ann Vriend spells out the savagery of the emotion in an unique way, magnified to capacity in the breathtaking “Anybody’s Different”.