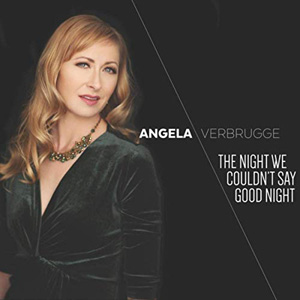 This is a stunning debut album for Angela Verbrugge. Simply stunning! How could it not be when Miss Verbrugge ignites The Night We Couldn’t Say Good Night by blasting off into the appropriately rarefied atmosphere of Bebop with her proverbial nod to the great Eddie Jefferson and Jon Hendricks? “I’m Running Late”, Miss Verbrugge’s own composition (with pianist Ray Gallon), is an effervescent and racy opening and a perfect vehicle to establish her credentials – some might say, in keeping with words we have become accustomed to hearing: “street-cred”. The original song is a deceptively easy-looking piece on the page, but keeping the scatter-shot of its melodic ground-rhythm pulsating meaningfully and building the slow-to-raging burn crescendo over several minutes requires advanced levels of technical proficiency.

Clearly this is the kind of vocalastics that Miss Verbrugge has in spades. Still, to begin an album – any album – at this kind of pace is daring. It sets bar very high for the vocalist and she simply sails over it and soars thereafter with one magical work after the other, albeit none with the kind of fireworks with which she begins the album (perhaps that’s another album for which may have to wait a little longer). Nevertheless, passionate accounts in song continue on works of considerable nuance and, in places, technical complexity. Each song is like low-hanging fruit, lusciously ripe for the picking, so all you have to take your pick. However, even a “perfect” album may feature some songs that are more magical than others. Some that qualify are certainly “Love Walked In”, “All Too Soon”, “Interlude (A Night in Tunisia” and “The Night We Couldn’t Say Good Night” this latter one penned by Miss Verbrugge herself.

There is much to recommend those songs. This begins with beautifully crafted arrangements in beguiling variety and sensuousness. Miss Verbrugge addresses each with the breathtakingly, absolutely natural and unaffected purity of her voice, heard in every lovingly caressed phrase. She makes all of her chosen material sound magical – the lesser-known gems and the more familiar material. Listening to the way Miss Verbrugge seductively bends the notes of the melody on “All Too Soon” and “Interlude” is matched by the memorable manner in which she sculpts the sustained invention of “Interlude”. There is not a wrong accent or articulation; never a wrong turn throughout this – and the rest of the – repertoire.

One suspects that the gentle (and firmly guiding) hand throughout this recording process, of the inimitable Cameron Brown. Already wise to the ways of vocalastics from accompanying the great Sheila Jordan, Mr Brown is not only perhaps one of greatest masters of the contrabass, but a prodigious – albeit unassuming – producer. He is known to have brought with him pianist Ray Gallon and drummer Anthony Pinciotti too. Together these musicians seem completely attuned to Miss Verbrugge’s vision and artistry. That – and the fact that Miss Verbrugge is a gem of a vocalist – is what makes this an album to absolutely die for.