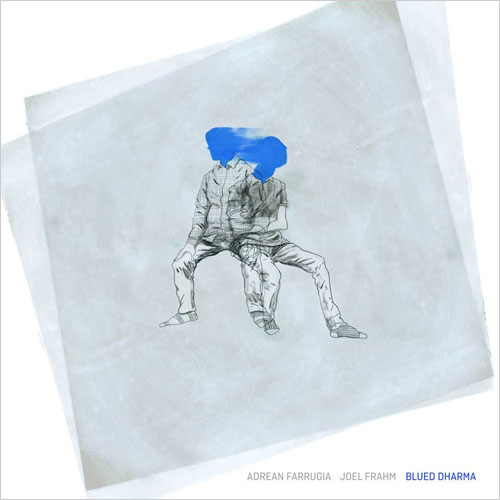 The relationship between pianist Adrean Farrugia and saxophonist Joel Frahm was fostered during their nine-year association with drummer and bandleader Ernesto Cervini which matured over numerous studio and stage performances. Both musicians have reported been in awe of each other’s abilities and have always sought an opportune moment to come together as a duo. Fortunately for them and those who have listened to the music they have made in the past, that opportune time has come and the album Blued Dharma is that meeting of minds.

Listeners will instantly perceive that very little sunlight separates the pianist and the saxophonist. On the contrary, the rays that illuminate their artistry light a flame that is vivid and – as they have rightfully determined – the music that results from it exists in the bluest part of that proverbial flame. The second word of the album’s title Blued Dharma may be harder to translate into the English language, but its Buddhist connotations of that which results in cosmic order, or indeed the collective meaning arising from an Eastern spiritual realm, is discernable all through the eight works of music contained in the disc – from the two exquisite and radically different versions of Ray Noble’s “Cherokee” to the original work from the pen of Adrean Farrugia.

Music in various shades of indigo suggest profundity and contemplative musicianship and each musician digs deep not only into his psyche, but also into his respective instrument, surfacing with what certainly gives new meaning to the words “melody” and “rhythm”, and – most significantly – “harmony”. The style of presentation is immediately alluring as the music appears in what one must reluctantly acknowledge as a “conventional” format. But how refreshing, timely and reassuring to find two musicians exploring endless possibilities of improvisation out of the fettered form of the “song”, completely undone thanks to each other’s transcendental ingenuity and deep empathy with each other.

Listening to the way in which Mr. Frahm seductively bends the notes in “Cherokee” (especially in the second version, i.e., track 2), or how Mr. Farrugia sculpts the long, sustained invention of “Half Moon” – to focus on just two of the eight beautifully crafted songs on this disc – it’s eminently clear that there’s not a semiquaver that hasn’t been fastidiously considered. Still the fact that none of this music is rehearsed or pre-planned accounts for why one is particularly awe-struck as the record unfolds from one song to the next. So whether evocative of crepuscular nights or cool rainy days, each track takes us into a special place with two trusting and inspired musical friends.