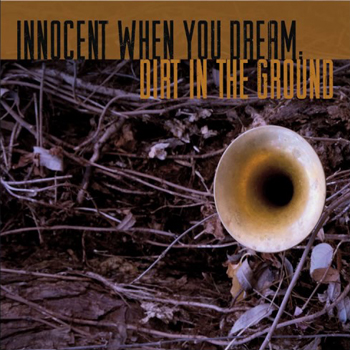 Somehow those lines from Descriptive Grammar of the Ground (almost complete poems seem wholly appropriate to bear in mind – and even read – when listening to Dirt In The Ground from Aaron Shragge’s Innocent When You Dream. The naked and unblemished ululations of his trumpet – the dragon mouth trumpet – and the cloudy billowing of air that escapes the shakuhachi (flute) not only conjure all of the imagism of Manoel de Barros’ poetry, but the natural festivities of the burbling earth and the steaming air above it seems to come to life. The other conjuring in this magical act is that the music rises like a new velvet curtain on the drama of Tom Waits and his own acts of faith, hope and contrition as he surveyed the world around him with the immensity of the child’s eye. Your room is no longer filled merely with music but also with a myriad of creatures awakened by the enchantment of Shragge’s trumpet, Jonathan Lindhorst’s tenor saxophone, Ryan Butler’s – and more poignantly, Joe Grass’ dizzy, howling – guitars. Meanwhile the fibrillating drumsticks and the toady bellow of the bass keep the tableau from levitating and disappearing in a pouf of smoke.

Something is lost without Tom Waits’ and – especially – Kathleen Brennen’s magical lyrics; perhaps a little more than was intended. However, there is no mistaking the nudity of feeling that is de rigueur in the music of Tom Waits (and his ever-so-talented) wife Kathleen Brennen. This ought hardly to be unexpected as the re-imagining of Waits/Brennen’s music in their instrumental incarnations was a conscious one. And it is here that Shragge’s genius takes flight most vividly. The almost warbling “singing and sobbing” of the trumpet and saxophone, and the raw screech-owl cries of the guitar and pedal-steel guitar comes viscerally-alive as the rustling of leaves burnt by the sun and the scratching and scampering creatures in Tom Waits and Kathleen Brennen’s narratives. And it is in these frequently magical moments that this music soars, unfettered…