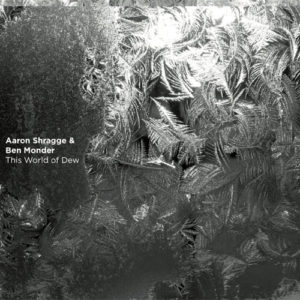 The music that Aaron Shragge and Ben Monder make as a duo is ghostly and conceptually appears to reimagine hypnotic faux-electronic music on an electric one – Mr Monder’s guitar – and a range of acoustic winds – Mr Shragge’s mesmerising, Zen-sounding Japanese shakuhachi, his Dragon Mouth Trumpet and the flugelhorn. Those listening to these musicians for the first time might assume – from this album – that the relatively exotic nature of Mr Shragge’s instruments shapes this music, but that assumption couldn’t be further from the truth. In point of fact Mr Monder’s long, echoing notes have just as much to do with the mesmerism of this music as Mr Shragge’s haunting whispers and wails. Whether he is playing shakuhachi, the Dragon Mouth trumpet or flugelhorn, the horns and shakuhachi are played with the tantalising tone of a snake charmer. Meanwhile Mr Monder’s lonesome guitar warbles and wails lend an eerie dimension to the music thanks in turn to his luminous phrases; a prism for Mr Shragge’s improvisations to pass through.

Minimalist and almost anthemic the sonic architecture of this music ascends constantly often without ever finding resolution, like a mesmerising drawing by Maurits Escher. The title of the recording The World of Dew is wholly appropriate and the music brilliantly unfolds like Japanese water colours awakening in moist shapes and designs on newly soaked paper. Magically, however, these notes that represent how this music will unfold come alive with each sound, leap off the page and animate the atmosphere of the listening room. Thus the world as envisioned by Mr Shragge and Mr Monder gradually comes into focus with each new song and seems to dissolve just as magically into the next one such as how “By Rain and Mud” dissolves into “A Tiny Boat” and so on.

This is one of the most remarkably empathetic duos you will ever hear. Even if a horn and a guitar might seem like strange bedfellows under normal circumstances, as each of the very eerie harmonisations unfold a masterful immensity, gorgeousness of tone and wondrous directness of manner take shape. Everything about this music is constantly unpredictable. Vast musical spaces are stretched out even further. Individual high levels of music making are taken to rarefied realms. Haunting interludes and longer works such as the magisterial “World of Dew Suite” – inspired by J.P. Seaton’s The Poetry of Zen and the poetry of the iconic Charles Bukowski published extensively by Ecco – unravel like poetic idioms as well as musical cryptograms from Elgar’s Enigma Variations, while sometimes spin as if echoing Holst’s Planets. However, the smiling with a sigh quality of this music is unerringly that of Mr Shragge’s and Mr Monder’s and it’s something to die for…