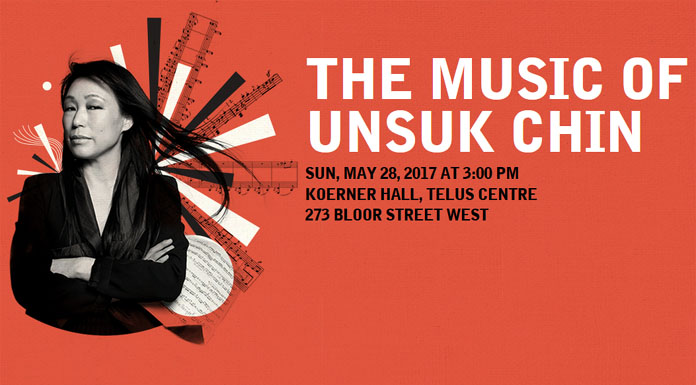 Toronto – Soundstreams, in partnership with The Royal Conservatory of Music 21C Music Festival, is thrilled to present The Music of Unsuk Chin on May 28th at Koerner Hall. The concert will feature opera, musical parody, jazz, and a virtuoso chamber orchestra under the baton of award-winning conductor Guillaume Bourgogne.

The Music of Unsuk Chin is Soundstreams’ last concert of the 2016/2017 season and will be closing the 21C Music Festival. Korean-born and Berlin-based, Unsuk Chin is one of contemporary music’s most sought-after composers. The New York Times calls her “fresh, vivid and uncompromisingly modern,” with an uncanny ability to incorporate humour into her work. Also, on the program are two works by Canadian award-winning composer Chris Paul Harman, who shares Chin’s affinity for transforming familiar source materials with musical language that is fresh, vivid, and thrillingly modern.

“The original decision to pair Unsuk Chin with Chris Paul Harman was made for artistic reasons: both have an impish sense of humour, a rare characteristic in contemporary music; but perhaps most important, each has the capacity to draw on a big canvas with small brush strokes, i.e., small musical vignettes become the vehicle for the exploration of larger themes. Then to my delight, I found out that the two composers already knew and respected each other, and that their musical kinship extended into the personal realm as well”, says Artistic Director Lawrence Cherney.

Chin’s Cantatrix Sopranica is the centerpiece of the concert, performed by star soprano Carla Huhtanen, sensual mezzo-soprano Ghislaine Deschambault, and countertenor Scott Belluz, with Guillaume Bourgogne conducting a virtuoso ensemble. This playful exploration of the act of singing is inspired by a parodic scientific paper entitled “Experimental Demonstration of the tomatotopic organization in the soprano (Cantatrix sopranica L.)” by French novelist Georges Perec, which describes fake experiments carried out on 107 female sopranos, and their reactions to having tomatoes thrown at. Composer Unsuk Chin explains:

‘Cantatrix Sopranica’ is a self-referential work and when I wrote it, I was particularly inspired by ideas and techniques of Perec and other members of OuLiPo group, a circle of experimental poets and mathematicians around Georges Perec and Raymond Queneau. In ‘Cantatrix Sopranica’ I associate the love of wordplay and combinatorial techniques such as anagrams, palindromes, and acrostic invention.”

The concert will also feature Advice From a Caterpillar for solo bass clarinet, an excerpt from Chin’s 2007 opera Alice in Wonderland. Chin is a longtime enthusiast of Lewis Carroll’s  timeless nonsensical masterpiece, and shares his affinity for parody, wordplay and rigorously constructed absurdity. Performed in costume by Anthony Thompson, this piece offers a fresh take on Carroll’s beloved caterpillar character.

This concert will be the world premiere of Harman’s It’s All Forgotten Now, which re-imagines the 1930’s jazz classic best known for its appearance in Stanley Kubrick’s movie The Shining. Its companion piece, Love Locked Out, will also be performed. Popular songs from the 1930’s, originally written by bandleader Ray Noble and sung by Al Bowlly, inspire both pieces. Harman says, “The popular music of this era appeals to me for its elegance, melodic and harmonic sophistication and subtly nuanced orchestration.” It’s All Forgotten Now is co-commissioned by Stanley H. Witkin and The Royal Conservatory of Music/Koerner Hall.