The lineage of Jazz has now gone back almost four generations since the legendary Buddy Bolden is known to have blown his life out marching down New Orleans streets ushering his ancestors to heaven, when he was not inspiring a young Louis Armstrong to reach for the stars in a some club where music raised the roof. But as successive generations of musicians all over the world strut their stuff, fighting not only for a share of the limelight, but more importantly, to have their voices heard and recognised; if, indeed, recognition is what they deserve. All this even as the world’s Jazz masters – Roy Haynes, Sonny Rollins, Wayne Shorter, Herbie Hancock and a handful of others continue to create an inspiration legacy of the world’s most beloved modern music from New Orleans and New York to Toronto, Vancouver, Calgary, London and Paris… and even Bombay and Seoul, Bejing and Surabaya. 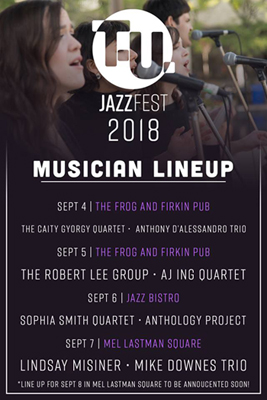 However, as communities in cities across the world continue to enjoy the music, it is no secret that patronage is drying up quickly, with governments finding greater need to spend on more pressing emergencies such as healthcare, coming to the aid of refugees. This begs the question: when will private sponsors step up to assist in preserving musical culture – especially that magical African-American one which gave birth to the Blues and Jazz? The answer, at least in the North American part of this continent appears to echo in a vast silence today.

London to Toronto
Fortunately younger groups of aficionados aren’t waiting for “something to happen”. Groups like #JazzNewBlood in London, England and the Toronto Undergraduate Jazz Festival are picking up the slack and have been giving it their all – unbeknownst to many. The latter institution is the brainchild of David Myungjae Lee, a young drummer who first beat a military tattoo in the South Korean Army before his family immigrated to Canada. Mr Lee is an alumnus of Humber College in Toronto. Before founding the TU Jazz Fest organisation Mr Lee was the artistic director of Han-River Jazz Festival, Marronnier Jazz Festival, Seoul Jazz Night Concert (Seoul City Hall) and DooTa Jazz Festival and also founder and artistic director of Korea Undergraduate Jazz Festival. Together with Becky Hargreaves vice-president, head of PR and Media, and Ana Tokareva, head of business support (there were others, but they have since moved on) Mr Lee’s team have put together the third edition of this challenging event.