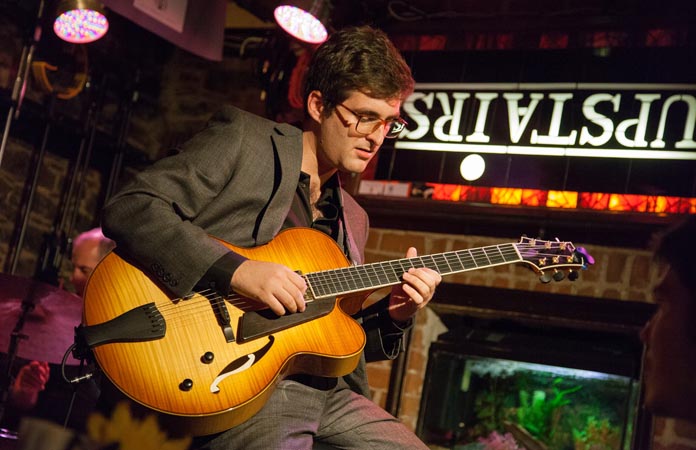 In Montréal, where he started life and also began life as a musician, Sam Kirmayer is extraordinarily well-respected. Wise beyond his years the guitarist has continued to turn in one solid performance after another with a slew of local musicians and others from around the country. His reputation as a student of the history of Jazz, the history of Canadian music as well as his place in it has earned him enough respect to have his recent recording released on the highly regarded West Coast label, Cellar Live.

In 2017 Mr Kirmayer received the Julian Award for Excellence for Emerging Artists, a prize awarded by Simon Fraser University’s CJSF 90.1FM, for his debut recording, Opening Statement. Clearly this early recognition has only served to advance his reputation not only among his peers, but also among the elder (and slightly-elder) statesmen in contemporary music, one of whom is André White – a fine drummer and pedagogue who teaches at McGill University in Montréal.

Mr Kirmayer, as it turns out, is as articulate when talking about music, his own craft and about life in general; as articulate as he is while extorting the most expressive sounds with pick (or fingers) on the strings of his hollow-body guitar.

You refer to the “certain musical ideals that I’m striving to aspire to”. Would you care to elaborate?

“That’s true. I’m working to achieve a deeper mastery of my instrument and a stronger command of harmony and rhythm, as well as trying to develop a more personal vocabulary. However I also find it helpful to think about things like honesty, clarity and commitment, which speak more to how and why something is played rather than what that something is. I think these are the elements of music that are the most universal and can be felt by anyone who’s listening.” 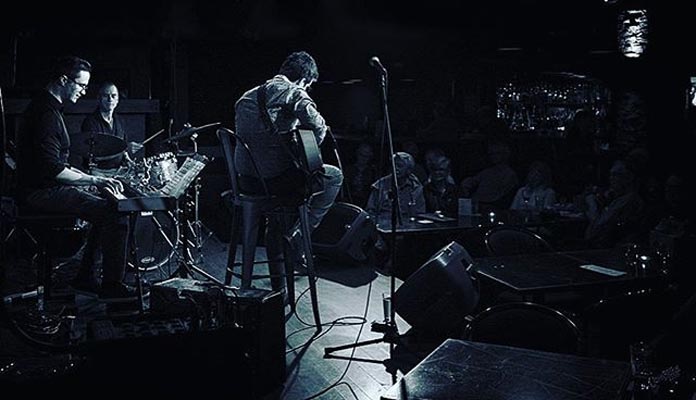 What do you think you did differently to what all the other organ trios such as Joey DeFrancesco and Dave Stryker’s?

“That’s a good question. Generally, I’m just trying to play and write the music that I love. And with this trio in particular, I’m coming at it from the angle of Grant Green with Larry Young, Wes (Montgomery) with Mel Rhyne, etc. I think that Ben Paterson is coming (at it) from more of a Jimmy McGriff thing. Dave Laing is also simply a very deep accompanist and is so versatile that he can really make any group gel together very quickly. I think that by approaching the instrumentation from those different angles and by choosing repertoire that avoided a lot of the clichés of the format, we were able to get our own thing going.”

You seem to have a lot of artistic influences “outside of music” and these “colour” your writing too. How important are these to your writing and playing?

“I can’t tell you how very important that is to me. I also can’t really explain how other art forms influence my writing and playing, but I know that they do. I’m at my most “productive” and “creative” when I allow myself to follow my curiosity and experience as much art as possible. I also think there is a lot to learn from the methods and work ethic of artists in all mediums.”

(Note: Mr Kirmayer revealed that the song “High and Low” takes its name from an Akira Kurosawa film. Mr Kirmayer also reveals his insight for the iconic Japanese director: “He balances heavy dramatic material with a sense of humour. There is an epic scale to his storytelling, but it still feels really human and relatable,” he says.)