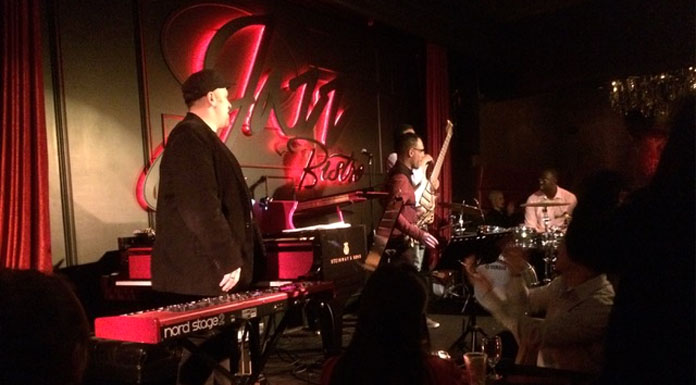 Ain’t No Foolin’ Around

One of my favourite groups, made up of some of  the  best musicians in the country, Rich Brown, Robi Botos, Luis Deniz and Larnell Lewis took to the stage at Jazz Bistro, in Toronto.  A three night run and a great showing of support from jazz fans and Rinse the Algorithm fans as well as fans of each individual virtuoso.

The Jazz Bistro is one of the last great jazz clubs in Toronto. If you want to see the best in Jazz in Toronto this is the place to be, fine sight lines to the stage from every nook and cranny, even on the second floor. I mention the second floor as this is where I was for the first set, the only table for three available.  On the Saturday evening that I attended Jazz Bistro was packed for the show, only a couple of  tables available upstairs with no direct view of the stage. Sybil Walker the manager of the club promised to try to get us a main floor table during the intermission prior to the second set. She made good on her promise, thank you Sybil.

The first time I witnessed the magic of Rich Brown and his Rinsethealgorithm was back in 2006 at another great jazz club, now long departed, Trane Studio. I reported on that show for the Live Music Report, a happening webzine that I happily contributed to for a number of years. A link to my report on that show is here for your historical pleasure.

That first show, eleven years ago, was a couple of years prior to the release of Locutions the 2008 premiere CD of Rinsethealgorithm. I have been waiting patiently for a follow-up album, but no such luck. The closest thing, is Rich Brown Abeng a 2016 release that features most of the same musicians from Rinsethealgorithm with a few major additions, Kevin Turcotte, trumpet, Kelly Jefferson, tenor saxophone, Chris Donnelly, piano and Robi Botos, piano on two tracks. The talented percussionist Rosendo Chendy Leon rounds out the line up and lends a pair of hands to the great feel of this project. Luis Deniz and Larnell Lewis are the mainstays of both bands.

The show at Jazz Bistro started with an introduction to the audience of the band by Sybil Walker. Rich Brown took over and thanked one and all for making their three night stand a fantastic event. He introduced the individual members of the band and made mention of the fact that he was fortunate to have with him Juno winner Robi Botos and Grammy winner Larnell Lewis. He plugged the Rinsethealgorithm CD “only available online” as well as CD’s that he had on hand for sale to the audience, Abeng his Juno nominated CD featuring all of these same associates, he blamed Botos for the loss, as Robi Botos took best Jazz Album 2016 for Movin’ Forward . Rich Brown also brought his solo effort from 2014 Between Heaviness and Here  and he smoothly mentioned the first song they would perform was from that album. “Lua“  a hauntingly beautiful piece that has a melodic guitar line in a Spanish ambiance. Without pause the full band joins in for a Rinsethealgorithm song. The band would also treat the guests to an Abeng song “Promesa”. 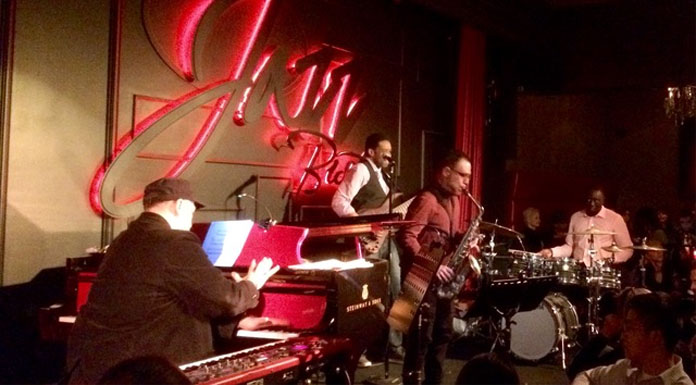 Rinsethealgorithm has aged nicely, all the members are more mature and their styles have progressed in the sense that they are not playing as urgently. The energy is a bit more refined, the language spoken is clearer, cleaner and with much more thought or perhaps less thought. The lines from the lead instruments at any given time are displayed seemingly effortlessly. The alto saxophone of Luis Deniz on all of his statements run clean, clear and articulate. Every line he plays is a statement of precise beauty and soulful tone, as if it is coming passionately from his heart or his gut.

Keyboardist Robi Botos is in the moment with an acute awareness that puts his playing over the top. He mixes pure jazz bop roots with all that is modern and makes it his own. Right down to his funk keyboard playing or his Wonderesque tributes.

Lead bassist Rich Brown is one of the most harmonic bass players on the planet. He holds the bottom end and keeps it all together, yet he can let his six string bass reign free, creating tones of beauty that bring tears to my eyes.  His look tells you that he is enjoying every minute of his time on stage. The interaction between Brown and drummer Larnell Lewis is intense, the energy seems palpable.

Lewis is a drummer of grand proportions, he is a big man, he has a strong stage presence and a powerful method of drumming. I have seen him overpower a band – but not this band. He adds to the drive, the excitement, the energy and of course the power. He makes this a contemporary power quartet, the modern jazz quartet. It is true that he is a busy drummer, he moves around the set with ease and has developed phenomenal speed combined with awesome technique. He displays marvellous sensitivity with dynamics and use of space that puts his playing on another level. Fortunately the other members of this supergroup are at the same level, the synergy of Rinsethealgorithm is something that has to be seen live to be truly appreciated.

Rinsethealgorithm performed most of the songs from the CD Locutions. The memorable stand out tunes for me, “Hibiscus”, “As If Sleepwalking With Head Phones On”  and “Algorithmic”. The final songs of the evening “Constellation 149” followed by  “Lakeside Stroll”  that turned into a super funky, upbeat, crowd pleasing, hand clapping, joyous romp that could have gone anywhere and on and on but in the most skillful fashion was brought back to earth in the Jazz Bistro to end off the evening with a crescendo of good vibes and two well deserved standing ovations.