To be fair, there’s also Allison Au, Rebecca Hennessy, Lauren Falls and Sarah Thawer. Together they will join Teri Parker to form Free Spirits, a new all-woman ensemble, the first order of business of which will be to play selections from the extraordinary repertoire of the prodigious Mary Lou Williams and the incomparable Geri Allen. While there ought not to be an uninitiated class among musicians or listeners of the great music of Jazz, it bears mention that Miss Williams is among the greatest composers and pianists in Jazz; a woman whose ascent to the upper echelons of music began in 1929 when she took over the chair of Andy Kirk’s band and went on to write celebrated charts such as “Walkin’ and Swingin’”, “Twinklin’”, “Cloudy”, and “Little Joe from Chicago”. Later Miss Williams worked as a freelance arranger for Earl Hines, Benny Goodman, and Tommy Dorsey.

In 1942, Miss Williams was joined there by bandmate Harold “Shorty” Baker, who became her second husband and with whom she formed a six-piece ensemble that included Art Blakey on drums. After an engagement in Cleveland, Baker left to join Duke Ellington’s orchestra, arranging for The Duke such works as “Trumpet No End” (1946) and a version of Irving Berlin’s “Blue Skies” by Irving Berlin. During the 1940’s Miss Williams started a weekly radio show called Mary Lou Williams’s Piano Workshop on WNEW and began mentoring and collaborating with younger bebop musicians such as Dizzy Gillespie and Thelonious Monk. 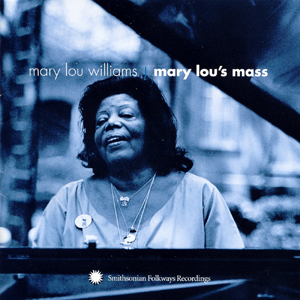 Miss Williams composed the bebop hit “In the Land of Oo-Bla-Dee” for Dizzy Gillespie in 1945. That year, she also composed the classically-influenced Zodiac Suite which had a masterful and late recording on Smithsonian Folkways in 1995, in which each of the twelve parts corresponded to a sign of the zodiac, and were accordingly dedicated to several of her musical colleagues, including Billie Holiday, and Art Tatum. Miss Williams recorded the suite with Jack Parker and Al Lucas and performed it December 31, 1945 at Town Hall in New York City with an orchestra and tenor saxophonist Ben Webster. A decade later Miss Williams converted to Roman Catholicism. Her music became ever more spiritual, incorporated Catholic dogma in it and she produced such epic works as Music for Peace (Mary Records, 1970) and later the celebrated opus entitled Mary Lou’s Mass (Mary Records, 1975).

Within musical circles and especially among Jazz pianist the prodigiously gifted Mary Lou Williams is a revered figure. She was a mere seven years of age when she began playing professionally and she was inspired by Lovie Austin who, with Lil Hardin Armstrong was one of the greatest Blues pianists of the 1920’s. She quickly caught the eye of the greatest Jazz pianists of the age: Fats Waller and Earl “Fatha” Hines, according to whom she could do no wrong. Miss Williams had a deep attachment to the classic Blues and her idiom – almost from the very outset – was informed by the profound intensity of The Blues. Later, after she converted to Catholicism, though its melodic content flowered out of Catholic doctrine it remained rooted in Black consciousness.

The deep intensity of the Blues tempered by the soaring voices of redemption began to find expression in palette of subdued, passionate tones, expressed with a touch that might be described as longsome, yet breathtakingly and poignantly heavy. So unique was her voice – and music – that it drew a legion of admiring fans among them some of the greatest ever musicians including Thelonious Monk (who considered her a mentor). Miss Williams’ music has, as a result, been celebrated through the decades with the inimitable and masterful modern genius, Geri Allen being one of the best-known keepers of the proverbial flame. Miss Allen came to music with a profound sense of the history of ethnomusicology. Her pianism, though more light and fluttering, was informed by glorious vaunted arpeggios and often dazzled by the soaring, edifying runs that grew organically into long and sculpted improvisatory inventions.