There is an iconic quote from Horace that describes Patricia Cano perfectly: poeta nascitur, non fit – “the poet is born, not made”. It is true of remarkable people – from the great and all-but-forgotten cricketer Sir George Headley to… well… practicing poets such from Catullus to Cavafy, Okigbo, Dylan Thomas and others… to Yeats, Eliot and especially Pound. But one also suspects that Horace could also be describing those very special people who were born with a prodigy so all-encompassing that they could put their mind to doing great things no matter what the “thing” actually was, or is.

And Patricia Cano is such a person. She could become an actor in musical theatre and she did. She could become a musician and a vocalist – brilliant at both crafts – and she did. But then she took it all to the proverbial “next level” She is not only a prodigious stage and screen actor but, also a musician, the craft of which she has mastered to a degree that raised it to a rarefied realm. Best of all she is able to create music to perfection in five languages – English, French, Portuguese, Spanish and Cree. 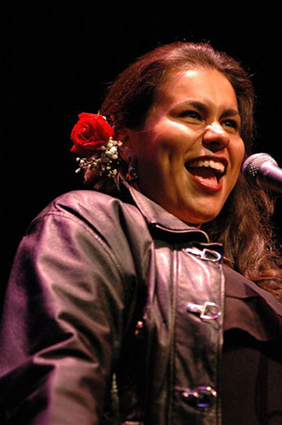 Artistic genius is something inexplicable; this is at the very heart of its defining physiognomy. Geniuses live with this internal enigma and are unable to reveal its mysteries and secrets. Miss Cano has, in all likelihood, never thought of her artistic life in this way. She is humbly and completely absorbed by these contradictions, ill at ease in a world of mundaneness, sometimes alarmed by their own uniqueness snow-blinded by a truth, which common mortals can only dimly perceive, and swept away by a primordial force that is so beyond them, geniuses play like children.

A genius and a gift to the world Miss Cano nevertheless view the world with the immensity of the child’s eye; creates and innovates as she was born to, for in her genius is an unbridled intellect that predominates over the will, which, in turn, allows the creation of artistic—even academic—works of pure contemplation, bereft of interest, specific or otherwise.

Of course, nothing happened to Miss Cano by accident. She grew up in a home brimming with culture in the Sudbury, Southern Ontario, Canada. The heritage of the city has been shaped not only by the culture of its indigenous inhabitants – the Ojibwe of the Algonquin group of people – but is also a prominent Franco-Ontarian region. The daughter of a Peruvian doctor Miss Cano remembers that the five hundred year old culture of the old country was always alive in all its glory at home in Sudbury.

But she was in a Franco-Ontarian town surrounded by a rich Indigenous heritage and it informed everything she did in school as well as in the University of Toronto, where she graduated with Honours in Theatre and Spanish Literature. It wasn’t long before she embraced the career as an artist and came to the attention of Tomson Highway, the Cree writer and composer. But Europe came calling and Miss Cano spent five years in Paris where she joined Le Théâtre du Soleil an internationally-celebrated theatre company. Already fluent in three languages – English, Spanish and French – it wasn’t long before Miss Cano made waves in France.