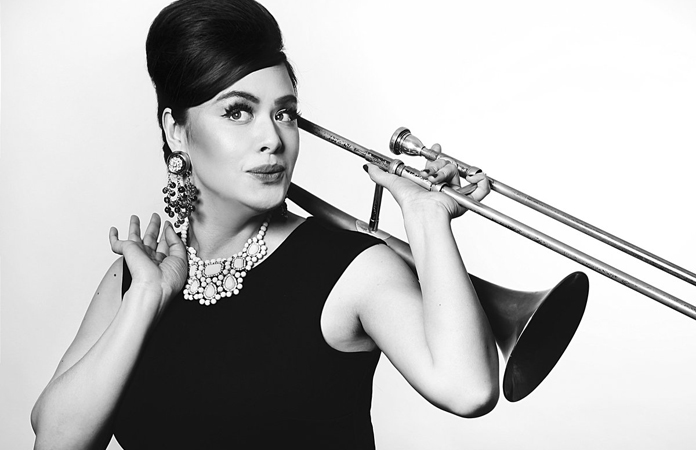 Audrey Ochoa has designs on her career. “Deep down,” she says, “I just want to be a pop star!” She’s much more than half way there already as she looks every bit the part and is mostly up for playing it too. But don’t be fooled by her flippancy. Deep down she’s a deadly serious musician who sees herself – and is indeed – not only part of a long line of musicians and despite a very busy, ever-burgeoning schedule she never fails to do the right things right.

Whether she’s writing music, or playing it in scores of settings on stage or in the studio, she never stops crafting everything she does; the long, inventions of a phrase that she sculpts seemingly out of the air with her trombone, or seductively bends notes and melts a couple into a breathtaking glissando she has discovered on the spot… No matter what she is doing on any given time of the day, Miss Ochoa is chipping away at the façade that is standing between her and where she wants to be.

…today I’m dangerously close to identifying as “an artist”

So if you felt that Miss Ochoa sets about creating feelings you’ll find a large measure of truth in that. All the ingredients are in her playing: tempo, dynamics and emotion, activated by the vibrations as her lips engage the air from her lungs singing, and her fingers extend the gliding tubing. This is the means by which Ochoa creates fine texture and timbre; her sense of spatial scale creates equal parts grace, rhythmic energy, and pure emotion in a kinetic response to combative, hair-trigger dynamic musical contrasts.

For proof of all of the above, look no further than the present recording, Afterthought, a mesmeric album full of swagger, swing and beckoning genius. 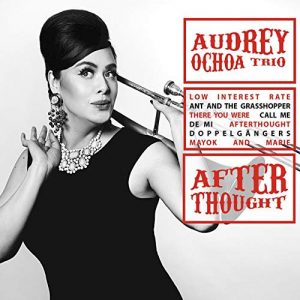 Audrey Ochoa’s inventions are redolent of light-handed glissandos and mercurial arpeggios played with quintessential charm and wit. The disc consists of eight works of unsurpassed beauty. Each song is alive with personal magic and happily shared imaginative possibility. Ochoa’s compositions are graceful, fluent and affectionate. Of course there is a lot that goes into everything that Miss Ochoa does. She recently revealed much of it in this freewheeling interview with the Toronto Music Report.

Toronto Music Report: You know that you’re part of a very small tribe – Melba Liston and the women trombone players. How does it feel to have cut two albums as leader?

Audrey Ochoa: There are a few female trombone leaders out there writing their own music. Melissa Gardiner and Karin Hammar, to name a couple off the top of my head. I don’t know any in Canada but admittedly I haven’t looked as hard as I could have. We’ll talk Melba Liston in a bit but to answer the second part of your question: The first album felt like a declaration of my existence to the world, the second album felt like I was asking people to get to know me.

TMR: What’s the response been to Afterthought?

AO: The response has been overwhelmingly positive and the spin off has been unbelievable. I was able to get some play on US college radio and through that distribution (via Chronogograph records) in the US too. I was also booked for a few gig offers in Dallas, Greensboro and Wilmington and elsewhere.

TMR: What was it like making the album? Did your experience making the first album help when going into the studio the second time around?

AO: Making Afterthought was relaxed. It had no deadlines, no producer, so there were no expectations. The first album was the result of a successful grant application and we didn’t (dare) veer from my written proposal. I had a producer, the great Tommy Banks, who called most of the shots and I like to describe my experience on that as being a spectator for much of it. And rightfully so, I had never done that before and had quite a bit to learn. Tommy was so decisive and experienced.

The second time around on Afterthought, I self-produced and financed it myself and had more of an interest in the production, the mix, and felt entitled to take a few more risks. For example, when I recorded “Afterthought” (track 6) it was originally just a trombone chorale, and my logic was, “Who cares if this is a bad idea… it’s my money I can do what I want.” Instead of a clear and decisive approach, we experimented and took turns.

TMR: Did you have to produce as well? What was that like?

AO: I still don’t totally understand what a producers’ role is on a jazz album- I feel like it’s just a sober third opinion that can say, “I like the second take the best” without any skin in the game. So to that end I liked being producer. But seriously, all three of us had a say in the final product. And that collaborative approach, where I could ask Sandro for something and Mike could change my written bass lines, and we could discuss changing the form to better suit a drum solo or whatever… All of that was great.