However, even the intrepid designer could never have imagined how far his lonely invention was taken by – of all people – the African-American Jazz musician, who was barely out of slavery. Surely that wasn’t supposed to happen. How dare Coleman Hawkins create his intense rendition of “Body and Soul” in October 1939, taking the tenor saxophone’s lyrical powers to a peak? And what, indeed would Wagner have said of the suavely elegant playing of Johnny “Rabbit” Hodges, I wonder? Of course, the world is probably still not fully prepared for Charlie Parker. It certainly wasn’t in the 1940s when the seminal bebop innovator, a notoriously wayward talent who frequently pawned his alto to support the drug addiction, which deprived Jazz of many of its luminaries in the postwar years. Parker’s innovations affected not just saxophonists but the melodic idiom of all manner of instruments, from the piano to the trombone and double bass.

I am suddenly struck by how exciting it would be to share the sofa in a living room with Adolphe Sax and a host of Simpsons fans, like myself, as we marvelled at the tone and timbre of the baritone saxophone. In each episode of the iconic television show’s opening sequence, Lisa, Bart Simpson’s younger sister, plays an impromptu solo in her school band before heading with her saxophone down the corridor of Springfield Elementary School. Come on now; don’t pretend you haven’t seen it. Allison Au certainly isn’t shying away from that and she tells me very early on that Lisa Simpson – if not an important influence – was certainly an early inspiration; not so much as Ella Fitzgerald was as she sang “Mack The Knife” (Miss Au’s source was Ella in Berlin) most pointedly as Miss Fitzgerald reported lost her way somewhere into the song’s lyrics and began to improvise her way by scatting and imitating the other instruments in the band as she soloed.

I plead guilty to a wandering mind at least once every hour on the hour and I have no way of overcoming this, even in the presence of a musician as attractive to be around as Allison Au. Sometime after asking her about her compositional process I lose my way completely. I suppose it has to do with the distraction of having found out that she likes the music of Djavan. However, instead of probing deeper into her predilection for the Brasilian’s music, I 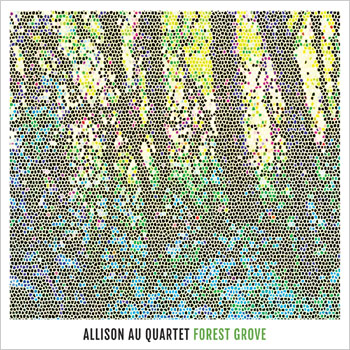 begin to hear Djavan singing “Capim”, accompanied by no one else but himself on the violão. I am afflicted by ghostly yet vivid aural hallucinations complete with visuals, and now I find that I am listening to Allison Au seeming to “sing” every note out through the bell of her saxophone. The song is “What Went with the Wind” from The Sky Was Pale Blue, Then Grey.

The next song is in my head too; the notes, breathed out, so to speak feel like hot breath caressing my ear as if from a woman in diaphanous gown of raw silk… and when I recover from this stultifying aberration, Allison Au seems to be talking over the song, leading me through its melodic labyrinth. I have the sudden urge to run away, but find myself rooted to the barstool. Besides, the song hasn’t ended yet. Her brief improvisation just before the end of the song approaches and everything in the room seems to be in suspended animation. Her eyes close. She sucks in a great gulp of air. It seems to settle in her small, yet powerful lungs. Then the first sounds emerge. Slow, controlled notes seemingly suspended in the air. I am transfixed. She leans into the song then bends backward as she squeezes the notes through her lips… out of the brazen bell of the horn. The unique near vocal arpeggios that are woven into the dyed musical fabric of “Tired Face” dance maddeningly as they unfurl in diaphanous splendor. The rest of the quartet dances to her magnificent solo.

I am transfixed and as I listen the song’s barely visible characters take shape before my eyes. The mighty dramaturgy of Allison Au’s, restless music has an immediate effect on me. She does not let up, even as she brings this music to a close. I watch as the notes take shape and fill out with tone and color… shades of warm rusts and yellows… greens, reds and browns… I watch as these notes pirouette in the air above me. The spectacular unfolding of timbre as the soprano saxophone interacts with the other instruments: piano, bass and drums; and most of as all Allison Au’s spry alto saxophone, suggestive of the human voice carved the air one last time as with the laughing voice of John Cage together with that of Morton Feldman takes over on “The Sky Was Pale Blue, Then Grey”. As I write this I am about to surrender my faculties to this album by Allison Au. Miss Au’s work throughout its repertoire reminds me of John Coltrane’s: probing, searching and rewarding for the listener. Each moment is absolute, alive and significant.