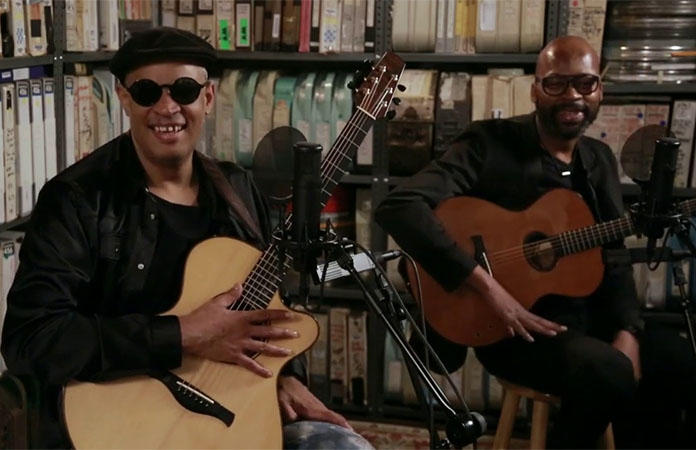 Genre-bending icons join forces for an evening of song and guitar wizardry, culminating in an unforgettable jam. Raul Midón is a “one-man band who turns a guitar into an orchestra and his voice into a chorus” (The New York Times) and Paul Simon raves that Lionel Loueke, who hails from Benin, is “one of a rare handful of guitarists that move effortlessly between his West African roots and modern American Jazz.”

Raul Midón: Heralded as a “one-man band who turns a guitar into an orchestra and his voice into a chorus,” (The New York Times) Raul Midón has collaborated with such heroes as Herbie Hancock, Stevie Wonder, Jason Mraz, Queen Latifah, and Snoop Dogg. Blind since birth, Midón produced-engineered his 2017 album, Bad Ass and Blind, using special computer software for the blind. The album, which confronts the challenges of his blindness with verve and grace, received a 2018 Grammy Award nomination in the category Best Jazz Vocal Album. His 2018 follow up release, If You Really Want, featuring the Metropole Orkest under the direction of Vince Mendoza, was nominated for a 2019 Grammy Award in this same category.

Lionel Loueke: Benin guitarist and vocalist Lionel Loueke has received critical acclaim from both his idols and contemporaries on his latest release, The Journey. Paul Simon raves that Loueke is “one of a rare handful of guitarists that move effortlessly between his West African roots and modern American jazz,” and Sting cites Loueke as “one the most original, essential, and inspiring musicians on our planet today.” As a Blue Note Recording artist and member of Herbie Hancock’s band for the past 10 years, Loueke has recorded and toured with artists as unique and varied as Terence Blanchard to singers Angélique Kidjo and Luciana Souza. Praised by Herbie Hancock as “a musical painter,” Loueke combines harmonic complexity, soaring melody, a deep knowledge of African folk forms, and conventional and extended guitar techniques to create a warm and evocative sound of his own.