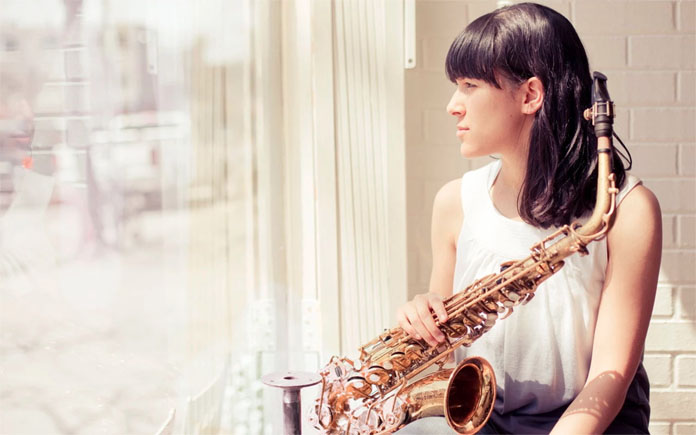 Juno-award winning Jazz Saxophonist, Composer and Arranger, Allison Au refuses to be defined. Born to a Chinese father and Jewish mother, and raised in the multicultural metropolis of Toronto, Allison found music as a young child. She was exposed to a wide array of musical styles but was captivated by the unhinged freedom of Jazz. Jazz became Allison’s lab for self-expression, exploration, and musical experimentation. Her music weaves a mosaic of influences into a seamless and soulful sound, a concoction steeped in the tradition of Jazz but skillfully laced with elements of Classical, Pop, R&B/hip hop, Latin, and world music.

Melodies cascade and collide, highlighting Au’s gift for layering voices and rhythms. Her writing showcases the color and character of each instrument, while providing ample room for her dedicated bandmates to push her compositions to new heights.

At just 27, Au earned her first Juno nomination for her debut album, “The Sky Was Pale Blue, then Grey”, and at 30 she seized the Juno for “Best Jazz Album of The Year: Group” for “Forest Grove.”

Formed in 2009, the Allison Au Quartet has toured extensively in Canada and the US. The group was awarded the TD Jazz Fellowship Scholarship (2011), The Alfred and Phyllis Balm Scholarship (2012), and The Margareta and Benno Nigg Scholarship (2013) for three consecutive artist residencies at the Banff Centre.

“It is rare that you find a musician with such an erudite voice, a saxophonist with so distinctive a tone; add to that breathtaking control of a colour palette that is used to dramatic effect so conscious of timbre; all of which is used with such aplomb while playing the alto saxophone. Yet such an instrumentalist is Toronto’s Allison Au. What a joy it is to listen to someone so expressive, of such pure musicianship that you feel you are approaching something you’ve never heard before.” — Raul da Gama